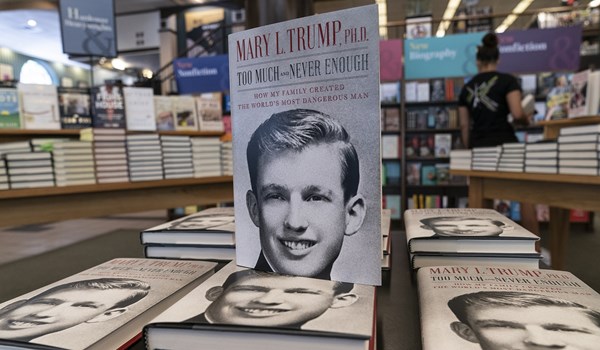 "They concocted scheme after scheme to cheat on their taxes, swindle their business partners, and jack up rents on their low income tenants" before targeting the teenage Mary Trump after the death of her father, Fred Trump Jr., the suit contends.

"Rather than protect Mary’s interests, they designed and carried out a complex scheme to siphon funds away from her interests, conceal their grift, and deceive her about the true value of what she had inherited," the suit claims.

White House Press Secretary Kayleigh McEnany dismissed the allegations when asked about them at a press briefing.

"The only fraud committed there was Mary Trump recording one of her relatives," McEnany said, a reference to secretly recorded conversations between Mary Trump and her aunt Maryanne Trump Barry, where the president's sister said he was a liar with "no principles".

"She really discredited herself," McEnany said.

Mary Trump also claimed that her uncles' machinations accelerated after the death of the president's father, Fred Trump Sr., in 1999.

The trio presented Mary Trump, who inherited minority interests in various Trump businesses, "with a stack of fraudulent valuations and a so-called settlement agreement, and forced her to sign. All told, they fleeced her of tens of millions of dollars or more", the suit says.

Mary Trump said she only discovered the truth in 2018, after an investigation into the family's finances by The New York Times.

The allegations mirror the charges Mary Trump leveled against her family members in her best-seller "Too Much and Never Enough: How My Family Created the World's Most Dangerous Man".

“My father died when I was still a teenager, and my uncles Donald and Robert and aunt Maryanne were supposed to be protecting me as my trustees and fiduciaries. Recently, I learned that rather than protecting me, they instead betrayed me by working together in secret to steal from me, by telling lie after lie about the value of what I had inherited, and by conning me into giving everything away for a fraction of its true value", she said in a statement Thursday.

"I am bringing this case to hold them accountable and to recover what is rightfully mine,” she said.

The suit seeks unspecified money damages against the president, his sister Barry and the estate of the late Robert Trump, who died in August, as well as punitive damages for their "malicious, wanton, and willful" conduct.