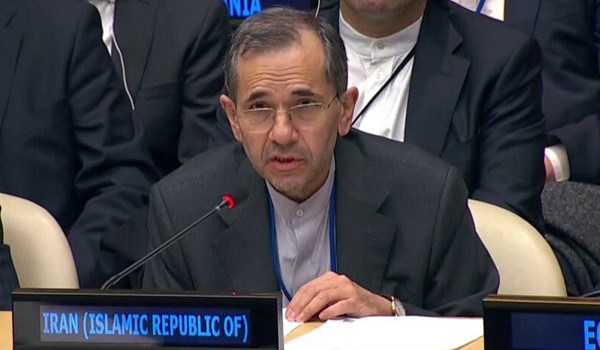 Takht Ravanchi rejected as "hackneyed" Trump's allegations made against Tehran during his speech at the UN General Assembly, saying the comments were meant "for domestic consumption".

He said on Wednesday that Trump's speech had nothing new and only contained false and unfounded claims against Iran.

"Trump's remarks were hackneyed altogether and contained nothing new. And given the current climate of [presidential] election in the US, his remarks were for domestic consumption and meant to gain votes," Takht Ravanchi added.

Elsewhere in his remarks, the Iranian ambassador to the UN talked about President Hassan Rouhani's virtual speech at the UN and the US presidential election in November.

He said America's upcoming vote was an issue of internal affair, and added, "What matters to us is that the US fulfills its international obligations, and who will become president in the US is the American people's business."

In his speech to the 75th UN General Assembly via video-link from Tehran on Tuesday, Rouhani reaffirmed Iran’s determination to hold onto its independence and domestic freedom under whatever circumstances, expressing confidence that the next administration in Washington will inevitably surrender to the Iranian nation’s resilience.

Separately, Iranian Foreign Ministry Spokesman Saeed Khatibzadeh also ridiculed Trump for taking the podium at the UN to advance his own goals, but to no avail.

"Donald Trump mistook United Nations for the United States once again," Khatibzadeh wrote on his twitter page on Wednesday.

"He (Trump) addressed UN75 like a campaign rally- glorifying his failed Only America policy and blaming others for crises of his own making: from his disastrous handling of Covid19 to his fanning of international tensions," he added.