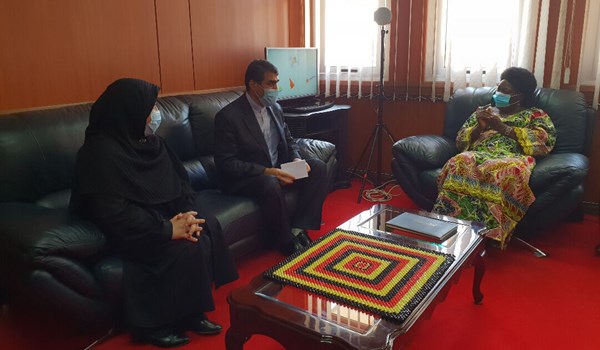 TEHRAN (FNA)- Ugandan Parliament Speaker Rebecca Kadaga in a meeting with Iranian Ambassador to Uganda Morteza Mortazavi called for the further development of relations and cooperation with Tehran.

During the meeting on Wednesday, Kadaga appreciated friendly relations between Iran and Uganda, and stressed the importance of using scientific, economic and technological capacities of the Iranian companies.

She said that bilateral relations between Iran and Uganda are based on long-terms interests.

Mortazavi, for his part, praised the efforts made by Ugandan speaker in line with reinforcing relations, and called for continuation of these supports.

He noted that the draft of the law to support mutual investment between two countries has been communicated.

In a relevant development in April, Iranian President Hassan Rouhani voiced the country’s readiness to promote relations with Uganda in all arenas without any limitation.

In a telephone conversation with his Ugandan counterpart Yoweri Museveni, President Rouhani hailed the perfect relations between Tehran and Kampala on the basis of mutual respect, saying, “We are prepared to enhance the bilateral ties in all fields without any limitation, and to employ the whole capacities and capabilities of the two countries in line with the friendly relations.”

Pointing to the difficult conditions that the outbreak of coronavirus has created for the nations, President Rouhani stressed that all countries should join hands in the battle with the disease.

“The special global situation should affect the interaction between the countries, so that certain states could not continue with their illegal measures,” he added.

The international relations are based on the principle that all parties remain committed to the international regulations, President Rouhani stated, adding, “Unfortunately, we are still witnessing the continuation and escalation of the cruel and illegal American sanctions against the Iranian nation in spite of the tough conditions due to the outbreak of coronavirus, as they (Americans) have violated the international law and regulations even on the delivery of medicine and humanitarian aids.”

The Ugandan president, for his part, denounced the US’ illegal actions against Iran, stressing that the humanitarian relations must have priority in the current difficult conditions.

It is necessary to promote peaceful coexistence and resolve the conflicts politically, Museveni underscored.

The African president finally hailed the close and friendly ties between Uganda and Iran, and called for the expansion of relations in all fields.