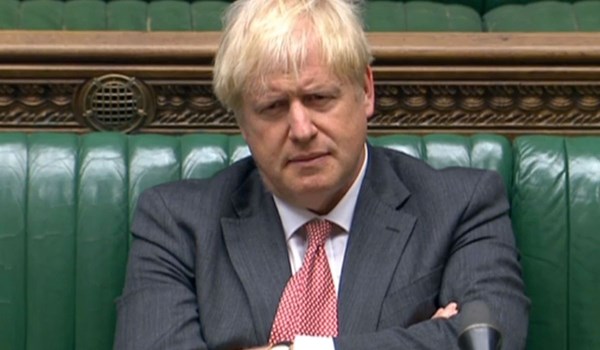 TEHRAN (FNA)- Prime Minister Boris Johnson was today accused of leading the UK into “another winter of discontent” amid fears of mass unemployment and a failing coronavirus testing system.

The prime minister came under pressure in the House of Commons for new financial support measures for businesses hit by the hammer blow of coronavirus restrictions expected to last six months, as well as an extension of the furlough scheme supplementing wages for workers who would otherwise by laid off, The Independent reported.

Johnson promised “further creative and imaginative schemes to keep our economy moving”, but gave no details of how chancellor Rishi Sunak might deliver the additional support being demanded by the CBI, unions and the Bank of England.

Labour leader Keir Starmer said that support for business was now “dangerously out of sync” with the restrictions on social and economic activity announced by the PM on Tuesday.

And he stated Johnson was “losing control of this virus” because he had failed to deliver an “effective system” to deal with the thousands of children showing suspected coronavirus symptoms after the return to school at the start of this month.

“The outcome is obvious,” Starmer noted, adding, “Child and siblings off school, mum, dad or carer off work, and in some cases whole year groups off school.

“How on earth did we get into this mess?” he asked.

Starmer accused the PM of being “out of touch” with the experiences of families with children back at school and “pretending there isn’t a problem” with the government’s COVID-19 testing regime.

The Scottish National Party’s leader at Westminster, Ian Blackford, said that 1 million jobs were at risk if the furlough scheme is ended next month as planned, at a time when the chief scientific adviser warns COVID cases could hit 50,000 a day.

And Blackford stated the damage from coronavirus risked being compounded by a £30 billion annual bill and queues of 7,000 lorries at Channel ports if Johnson’s government takes the UK into a no-deal Brexit.

“If those numbers become a reality, the prime minister is leading us into another winter of discontent,” added Blackford.

“The responsibility and powers for extending the furlough scheme lie with the prime minister and the chancellor," Blackford continued, noting, “The prime minister must announce an immediate extension - no half measures, no half-baked projects - to this vital and life-saving scheme. Will the prime minister show the leadership required and save the jobs?”

Blackford warned, “Time is running out. Workers are facing the dole today. Will the prime minister instruct the chancellor to extend the furlough scheme and stop 1 million workers being thrown onto the scrap heap by this government?”

The PM replied, “Of course, the furlough scheme has already been extended until the end of October."

“And as I said before, we will continue to provide the best support we can possibly give to keep people in work and get people into work while suppressing the virus,” he stated.

Johnson accused the Labour leader of making “unseemly and unjustified” attacks on the head of the NHS Test and Trace system, Tory peer Baroness Dido Harding.

He insisted the UK was “testing more people than any other European country” and would reach 500,000 tests a day by the end of October.

Starmer retorted that the prime minister knows my complaint is not with the NHS, it's with the government.