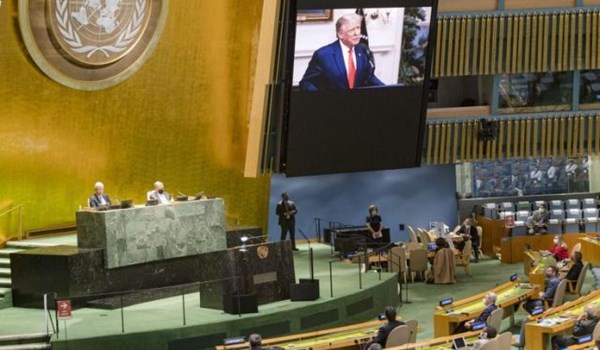 The president attacked Beijing and demanded that the world hold the nation “accountable for their actions”, suggesting China responded inadequately at the beginning of the outbreak of the coronavirus in Wuhan, The Independent reported.

“As we pursue this bright future, we must hold accountable the nation which unleashed this plague on to the world: China,” Trump said in the pre-recorded remarks.

“The Chinese government and the World Health Organisation, which is virtually controlled by China, falsely declared that there was no evidence of human-to-human transmission,” he said.

He added, “The United Nations must hold China accountable for their actions.”

The statements appeared to echo prior claims made by the president over China’s effort to curb the pandemic. Trump has previously said he has seen evidence suggesting that the virus came from a laboratory in China, a theory that has been largely debunked by the international scientific community and refuted by his own intelligence agencies.

Susi Dennison, from the European Council on Foreign Relations, said in a statement sent to The Independent that she viewed the speech as Trump being “desperate for ammunition” while vying for re-election.

“Trump has continued his policy of angry unilateralism by ‘taking aim’ at China in his speech,” Dennison said, adding that the president has “broken European citizens’ trust in the US”.

Trump initially announced a ban on travellers from China entering the US and subsequently declared the pandemic a national emergency in mid-March, though experts have now said those efforts were not enough to prevent the virus from taking hold across the country. As the president spoke to the United Nations, the number of Americans who have died from COVID-19 was expected to continue rising beyond the toll of 200,000.

The president referred to COVID-19 as the “China virus” during his remarks at the UNGA, a term he has repeatedly used when blaming Beijing for the pandemic.

Almost 1 million people around the world have died because of complications resulting from the virus. In the US, the total number of infections passed 7 million this week. There have been over 31 million total cases reported worldwide.

Trump promoted his “America First” agenda at the UNGA in his remarks while saying he was confident the world would “defeat” the coronavirus pandemic. The president recorded the remarks in Washington rather than delivering the speech in New York as is traditional.

While speeches at the UNGA are typically apolitical in nature, the US president has consistently celebrated his agenda and touted his accomplishments when speaking there. In 2018, Trump received unexpected laughter from the audience of world leaders after he claimed that his administration had “accomplished more than almost any” in history.

“For Trump, the priority is re-election. The damage to institutions and relationships, such as the UN and the Transatlantic Alliance, do not even register,” Dennison said, adding, “It’s little wonder, then, that after four years of verbal assault, fewer than one in ten Europeans believe the US can be trusted to provide leadership on global issues such as COVID-19.”