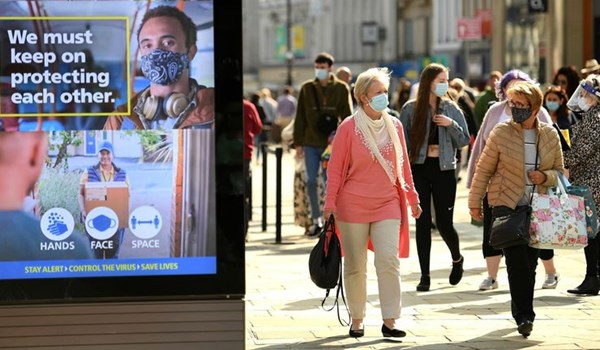 Speaking to Kay Burley, Dominic Raab said "we can't rule it out", but stressed the government will "take every effort to avoid that".

The foreign secretary was speaking after Prime Minister Boris Johnson announced new restrictions to try and combat the rise in COVID-19 cases in England:

In a televised address to the nation on Tuesday night, the PM urged Britons to "summon the discipline and the resolve" to avoid a second national lockdown after warning there have been "too many breaches" of the rules.

Asked about the prospect of another national shutdown, Raab told Sky News, "We've always said we've got a sort of repository of measures in the arsenal to take."

"I don't think we would speculate about what further could be done," he stated, adding, "But the reality is they will be more intrusive or we could end up in a national lockdown. That is what we want to avoid."

The foreign secretary described the government's approach as "focused, balanced and proportionate".

And he defended the 10 pm curfew for hospitality, after it was put to him that just 5% of cases in recent figures were linked to pubs, bars and restaurants.

"We know that in bars and restaurants, particularly after people have had a few drinks, as you go into the later hours of the evening, that there's a risk that the compliance with the guidance ebbs a little bit," Raab said.

"So we're taking this measure, we're confident based on the evidence that we've got domestically and internationally that it's one element of those that we need to make," he added.

With Johnson warning that the new rules could be in place for as long as six months, the foreign secretary was asked if the chancellor would be extending the furlough scheme.

Raab noted Rishi Sunak was "not minded to have a wholesale extension" - a potential hint that partial extension may be in the offing.

But the shadow Cabinet Office minister told Kay Burley that Labour wants ministers to "fix" the test, track and trace system to provide more support for businesses and workers, and "local packages of support" for areas badly affected by the virus.

The devolved administrations in Scotland, Wales and Northern Ireland are able to introduce their own restrictions and move at a different pace if they so choose.

First Minister Nicola Sturgeon has gone further than the PM, announcing a ban on households visits in Scotland.

People in Northern Ireland have already been banned from mixing with other households indoors.

Welsh First Minister Mark Drakeford said "many of the things the prime minister is talking about doing today, we have already done in Wales".

"Very early on, we put the two-metre distance in the workplace into our regulations - it's not been in guidance in Wales, it's been a legal obligation on employers," Drakeford told the Welsh parliament on Tuesday.

"The prime minister is going to tighten the rule of six. Well, our rule of six has been tighter all along - you can only meet somebody from your extended household," Drakeford added.