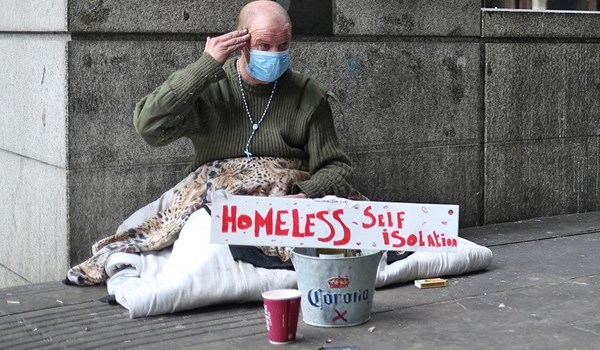 TEHRAN (FNA)- Space in homeless shelters could drop by as much as two-thirds because of physical distancing regulations, experts warned, leaving rough sleepers with nowhere to turn as winter approaches.

Charities and councils are scrambling to put together plans to provide winter accommodation for a growing number of people left homeless due to the economic impact of the coronavirus crisis, The Guardian reported.

Night shelters are still closed in line with government guidance to prevent the spread of COVID-19, and charities fear that if they reopen they will only be able to house a fraction of those they previously could.

Many hotels that were used as homeless accommodation during the national lockdown have returned to business as usual, and charities are urging ministers to provide guidance and funding to help them house the vulnerable as temperatures fall and coronavirus rates rise.

Housing Justice, the national membership charity for night shelters, said social distancing meant if and when they reopened, winter shelter capacity would be reduced by around two-thirds, meaning less than 1,000 beds available through their network.

In previous years the organisation has used dormitory-style shared rooms, but this year it is hoping to offer either private rooms or self-contained pods within larger rooms.

In order to stay COVID-safe, Housing Justice will need to rent more space and employ more staff, meaning the cost of running a single shelter will triple in most cases, from around £25,000 for three months to £65,000.

“It is certain that cold weather night shelter projects will offer significantly fewer beds this winter, in many cases where shelters can run they will look very different to what has gone before and in some cases projects … cannot run at all,” Mohan noted.

She added it would “present huge challenges for local authorities and homelessness services as they seek to plug this gap in provision, particularly at a time of severe economic hardship and the likelihood that homelessness presentations will increase”.

Lucy Abraham, chief executive of the homeless charity Glassdoor stated, “The challenges of the new COVID world have forced us to adapt, to come up with new and creative ways to provide shelter and support … Of course, implementing a brand-new service model will be both costly and complex to implement, at a time when traditional fundraising has become more and more difficult.”

Councils are similarly making plans amid uncertainty. Cllr Darren Rodwell, London Councils’ executive member for housing and planning, said, “We’re working flat out to arrange on-going homelessness support over winter … We’re doing everything we can to keep rough sleepers in accommodation – not only for their own safety but also to help minimise the spread of the virus.”

“In London, we’re spending an extra £97mln on homelessness and rough sleeping this year because of COVID-19 – and the funding we’ve received from the government is nowhere near enough to meet these fast-rising costs,” Rodwell added.

At the height of the pandemic, rough sleepers were given shelter in hotels and other accommodation through the government’s Everyone In scheme – which saw £3.2mln spent on getting people off the streets.

Housing, communities and local government secretary, Robert Jenrick, boasted they had successfully taken 90% of homeless people off the streets to protect them from the virus. But figures collated by outreach workers, published by the Greater London Authority, showed numbers of rough sleepers up by a third during lockdown compared to the same period last year.

The government scheme also appears to be winding down. Greater London Authority (GLA) announced of the 16 hotels in use at the height of the pandemic, seven are still being used as accommodation for 679 residents, down from a peak of around 1,400.

In Manchester, five out of the 12 hotels that took part in the government’s “Everyone In” scheme during lockdown are still being used to house rough sleepers.

The city’s council does not plan to use any dormitory-style shelter accommodation this winter, but said this could change if the coronavirus crisis improved. They have not been told what central-government funding they will be getting.

Nick Stirling, chaplain at the Manchester City Mission, which provides emergency accommodation in Salford, noted both he and other support services in the city had witnessed “a vast returning to the streets” over the summer.

Although pre-COVID the shelter’s 30 beds were full almost every night throughout the year, if they are able to open to Manchester’s homeless population this year, the mission will be operating at half its usual capacity because of social distancing measures.

A Ministry of Housing, Communities & Local Government spokesperson added, “As winter approaches we are also working with the homelessness sector and health experts to consider how shelters can reopen as safely as possible where they are needed.”