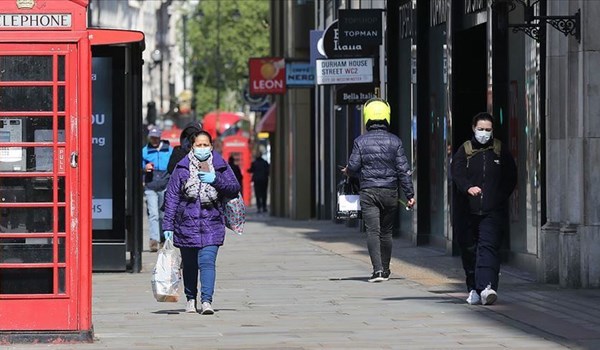 Public Health England's most recent watchlist shows the authority in England with the lowest case rate considered an "area of intervention" - the highest degree of concern - is Ribble Valley, with 18.3 cases per 100,000, The Daily Mail reported.

But Kensington and Chelsea, Enfield and Southwark, among others, have infection rates higher than that. Redbridge (34.2), Hounslow (32.5) and Barking and Dagenham (29.3) are the three worst-hit parts of the capital.

Khan has urged ministers to extend the latest restrictions on hotspots in the North East and West – including ordering bars and restaurants to close at 10pm – to cover London as well.

He is also said to be encouraging "working from home" - a move which would be in sharp contrast to the Government, which has until recently been urging people to get back to their offices.

TomTom data showed roads in the capital were 36% congested at 7am this morning compared to 41% last week, suggesting some workers are wary of the increase in infection rates.

It came as Sir Patrick Vallance on Monday warned the UK faces 50,000 new daily cases of coronavirus by the middle of October and more than 200 deaths everyday by November if the spread of the disease is not brought under control.

The Chief Scientific Adviser gave the stark warning as Professor Chris Whitty said the UK has "in a bad sense literally turned a corner" and that the nation needs to view the fight against the disease as a "six month problem" over winter before science eventually can "ride to our rescue".

Health Secretary Matt Hancock has admitted the introduction of new lockdown restrictions in London within days cannot be ruled out in light of rising cases.

Across London as a whole, the rate of cases is reported to have increased in a seven day period ending early last week, from 18.8 per 100,000 people to around 25.

It's a rise of 33 percent in one week - faster than the North East, which last week was hit by tougher restrictions to control the spread of the virus.

The number of cases per 100,000 has jumped up from 18.8 to around 25 in seven days amid schools re-opening and a drive to get people back into offices and pubs, data suggests. If it crosses over 50, a "local lockdown" could be triggered, documents seen by The Evening Standard reveal.

And the Office for National Statistics (ONS) estimates 0.2 percent of London's population - 178,000 people - are currently carrying the coronavirus, which is second only to the North West. For comparison, the rate in the North East is just 0.16 percent.

Public Health England figures show Redbridge, a borough in the East of the city, has the highest COVID-19 infection rate at 34.2 and cases have risen in the authority for four weeks in a row. For comparison, the highest in England is 175.2 in Bolton, Greater Manchester.

It is followed by Hounslow (32.5) and Barking and Dagenham (29.3) - boroughs on two opposite sides of the city, suggesting spread is not just limited to one part of the capital.

If they had been given "area of intervention" status, the Government would support the implementation of a "detailed action plan" to stop cases spreading.

The only reason Ribble Valley has had any intervention is because health bosses in the North West called for a crack down before the outbreak spiraled out of control. The weekly infection rate for the whole of England is 33.8.

South London has escaped the current spike in cases, with the three boroughs with the lowest infection rates at present being Sutton (9.3), Bromley (11.8) and Bexley (12.1).

London Mayor Khan will meet with council leaders Monday to discuss lockdown restriction measures which he has publically supported.

He has pressed ministers to extend the controls to the capital, which he believes may be just "two or three days" behind the hotspots of the North-West and North-East of England where curfews and bans on socialising have come into force.

He initially said London is "two weeks behind" some regions of the UK where COVID-19 rules are tighter. While data from only a few days ago suggested London was two weeks behind those areas, the latest modelling seen by Khan was said to show the gap had closed to two or three days.

A mayoral source said, "It's clear that cases in London are only moving in one direction, we are now just days behind hotspots in the North West and North East. We can't afford more delay."

"Introducing new measures now will help slow the spread of the virus and potentially prevent the need for a fuller lockdown like we saw in March, which could seriously damage the economy once again," he said.

Sunday, Hancock was asked on Sky News about comments from Khan that restrictions in the capital were increasingly likely.

He said, "I've had discussions this week with the Mayor of London, and the teams are meeting today to discuss further what might be needed."

A mayoral source told HuffPost, "It's clear that cases in London are only moving in one direction, we are now just days behind hotspots in the North West and North East. We can't afford more delay.

"Introducing new measures now will help slow the spread of the virus and potentially prevent the need for a fuller lockdown like we saw in March, which could seriously damage the economy once again," he said.

He is also said to be looking at the possibility of asking those who are able to work from home to do so.

There has been a toughening up of government rhetoric over COVID in recent days amid an upsurge in infections.

People in England who refuse an order to self-isolate could now face fines of up to £10,000.

Ministers will impose a new legal duty on people to self-isolate if they test positive or are told to do so by NHS Test and Trace after coming into contact with someone with the virus.

Those on lower incomes who face a loss of earnings as a result of going into quarantine will be eligible for a one-off support payment of £500 to help them cope financially.

With new cases of the infection doubling every week, Prime Minister Boris Johnson said the measures were necessary to control the spread of the virus and to protect the most vulnerable from becoming infected.

However they are likely to alarm some Conservative MPs already concerned at the wide-ranging powers being taken by ministers to curb the disease with little or no debate in Parliament.

The new regulations will come into force in England on September 28, although ministers are in discussion with the devolved administrations for Scotland, Wales and Northern Ireland about extending them UK-wide.

It follows a warning by Professor Neil Ferguson, of Imperial College London - whose modelling led to the original nationwide lockdown, that the authorities needed to act "sooner rather than later" if they were to avoid a return to the infection rates of last March.

Ministers are still looking at further restrictions, including a temporary two or three-week "circuit break" in an attempt to break the chain of transmission.

The move could see pubs and restaurants ordered to close or face a 10pm curfew, while socialising between households could be banned.

On Friday, the Prime Minister acknowledged the long-feared second wave of the pandemic affecting countries such as France and Spain had reached Britain and that more cases of the disease were "inevitable".

Announcing the new rules, Johnson said, "The best way we can fight this virus is by everyone following the rules and self-isolating if they're at risk of passing on coronavirus."

"And so nobody underestimates just how important this is, new regulations will mean you are legally obliged to do so if you have the virus or have been asked to do so by NHS Test and Trace," he said.

"People who choose to ignore the rules will face significant fines. We need to do all we can to control the spread of this virus, to prevent the most vulnerable people from becoming infected, and to protect the NHS and save lives," he added.

Fines will initially start at £1,000 rising to £10,000 for repeat offenders and for "the most egregious breaches" including those who stop other people from self-isolating, such an employer who requires a staff member to come into work in violation of an order.