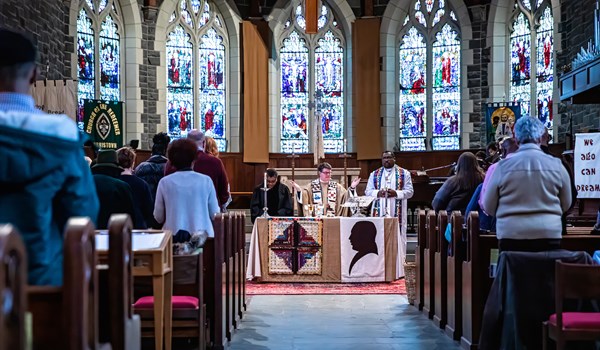 They are calling for the advertisement’s removal from display and federal protection from any bias or threats it could provoke, The Guardian reported.

The video, named Meet Joe Biden’s Supporters, is online and includes violent scenes of burning buildings and police cars followed by footage of the Democratic presidential nominee kneeling in front of the altar at Bethel African Methodist Episcopal (AME) church alongside Black clergy members and community leaders in his hometown of Wilmington, Delaware.

The apparent voice of Vice-President Mike Pence is heard saying, “You won’t be safe in Joe Biden’s America, adding,” It then cuts to text that reads: “Stop Joe Biden and his rioters.”

The AME church on Monday denounced the ad, which they said links the church to violence and implies “that those who gathered there are ‘thugs’”.

The statement, whose signatories include Bishop Michael L Mitchell, president of the AME council of bishops, and Bishop Frank Madison Reid III, chair of the church’s commission on social action, said, “This ad subtly incites white terrorism against people of colour and attacks the Black church and Black people for refusing to bow down to the idol called white supremacy.”

They demanded an “immediate apology” to Bethel AME church and to Beaman, for the ad to be removed from all networks and “federal protection” for the church, its staff and community.

They also called on the federal Departments of Justice and Homeland Security to launch an investigation into the “legality of the Trump campaign’s misrepresentation and Photoshopping images” and the “rhetoric as the language that might incite violence, and encourage racial tensions that lead to placing people of colour in harm’s way”.

Describing the ad, Reid told the Guardian, “In one word it was appalling, another word, divisive, and thirdly it was destructive.”

He added, “The insinuation that the church is a violent institution has brought attacks for centuries here in America against any Black person, male or female, any Black institution, that would dare stand up and speak up against white supremacist practices in the areas of culture, politics, spirituality and finances.”

Citing the recent killings in Kenosha, Wisconsin, where an armed, white agitator shot dead two men who were protesting against the police shooting of a Black man, and the shooting of two sheriff’s deputies in Los Angeles in an ambush at the weekend, Reid added, “There is a culture of violence that is being stirred up by those who have a political agenda.”

The statement, he said, is a warning “to alert the nation and to alert people of colour that this election and these shootings and this violence is all the hate that white supremacists’ hate has produced”.

While he said he is sure the church in Wilmington is “prepared” following the ad, that in the current climate they need “federal protection until this thing cools down”.

The statement said the FBI was investigating vandalism against “multiple” AME churches and that they “continue to cope” following the 2015 mass shooting at Mother Emanuel church in Charleston, South Carolina, by an avowed white supremacist.

“We are apprehensive that the history of burning and bombing Black churches is being stirred up by a political party that has lost its moral bearings. We are deeply concerned that the white supremacist lynchings, murders and assassinations of Black men and women, boys and girls in the past, is the plan for the present and future,” they said.

An FBI spokesperson said, “Per our usual policy, the FBI does not confirm or deny the existence of investigations. We do not have further comment.”