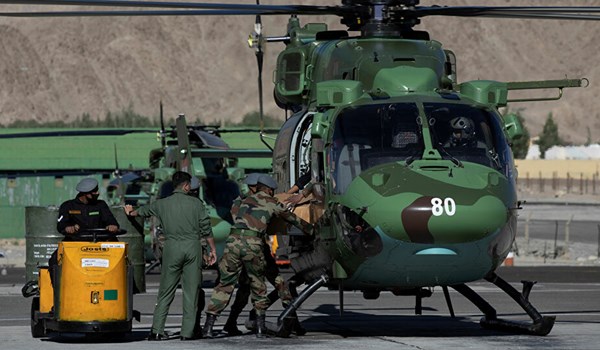 TEHRAN (FNA)- With Chinese troops refusing to return to the position they held prior to this year's standoff with the Indian army in Eastern Ladakh, New Delhi started ramping up the operational readiness of its armed forces.

Indian government sources told Sputnik that while “talks are in progress to resolve the issue of borders with China in Eastern Ladakh, at the military level it is well-prepared for a prolonged standoff”.

The sources rejected reports in the Global Times, a Chinese establishment media outlet, that India’s operational logistics were not sufficient to prepare troops for fighting during the winter.

“This can best be attributed to ignorance. The Indian Army is fully prepared and more than capable of fighting a full-fledged war, even in winters in Eastern Ladakh,” the source underlined.

The source added that India’s logistics capabilities with respect to providing lodging, mobility, high-quality weapons and ammunition were enough for the troops to “simply plug and play”, which has been enhanced since the deadly face-off between the armies in mid-June.

The source who was privy to the preparations said the Indian army has experience deploying in more demanding snowy regions like Siachen.  India has also improved infrastructure in the region for providing logistical support to the armed forces.

“We have a large number of air bases with the help of which, we can maintain the army well. Modern snow clearing equipment has also been placed on these routes to keep them open beyond November, thus giving us more time for the daily maintenance of the troops,” revealed the source.

“China’s concept has always been to win wars without fighting, hence if they create the conditions for war, they will come across better-trained, better-prepared, rested and psychologically hardened Indian troops,” the source said.

India and China were engaged in talks at the level of the military commanders, as well as at the diplomatic and recently at the political level.

India's Defence Minister and its Foreign Minister met their Chinese counterparts in Moscow earlier this month, on the sidelines of an annual conference of the Shanghai Cooperation Organisation.

Indian Defence Minister Rajnath Singh, in a statement in Parliament on Tuesday (September 15) warned that “any serious disturbance in peace and tranquillity along the LAC in the border areas is bound to have implications for the positive direction of our ties.”

The minister clarified that any attempt to unilaterally alter the status quo by China is “unacceptable”.

“While no one should doubt our determination to safeguard our borders, India believes that mutual respect and mutual sensitivity are the basis for peaceful relations with our neighbours,” he assured Parliament.

Rajnath Singh had assured the lawmakers that India has made appropriate counter deployments in Eastern Ladakh, where China has mobilised a large number of troops and armour, “to ensure that India’s security interests are fully prepared”.

China has deployed around 52,000 troops including 10,000 last week to the Eastern Ladakh region, where highest number of transgressions has taken place in 2020.

India and China, both nuclear powers, share a 3,500-kilometre (2,175-mile) border, known as the Line of Actual Control or LAC. It stretches from the Ladakh region in the North to the Indian state of Sikkim. In Eastern Ladakh, it passes through Pangong Lake.

India controls the Western portion of the 45-km long lake, while the rest (about 119-km) is under Chinese control. Most of the clashes between the two countries have taken place in Ladakh's Galvan Valley.