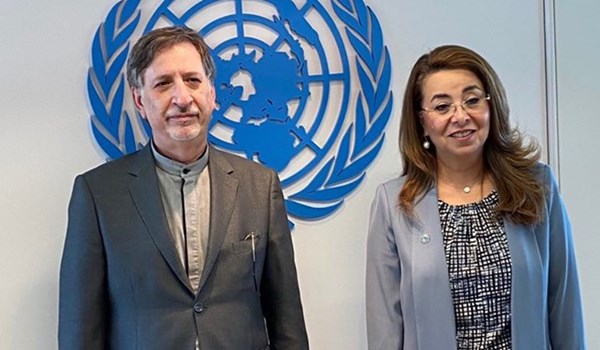 TEHRAN (FNA)- Iranian Deputy Foreign Minister Mohsen Baharvand in a meeting with Executive Director of the UN Office on Drugs and Crime (UNODC) Ghada Fathi Waly called for restitution of property gained through corruption or rubbery by the criminals who had escaped Iran.

Baharvand pointed to programs of Iran's three branches of power for fighting crimes and corruption, and said, "Restitution of property gained through corruption or rubbery by the criminals who had escaped Iran and are now in Western safe haven is an issue which should be taken into consideration."

Baharvand, meanwhile, pointed to the casualties and property loss Iran has suffered in fighting drug traffickers, and urged the international community and the UNODC to pay more serious attention to this issue and reinforce capacity and resources from countries like Iran.

The Iranian diplomat also criticized illegal and unilateral sanctions and elaborated on their impact on fighting narcotics.

Baharvand said that in addition to the importance of making efforts to lift such cruel sanctions, decisions should be made for helping the countries with necessary anti-drug equipment.

Elsewhere in his remarks, he commented on human trafficking and suggested maintaining joint trilateral efforts by Iran, Afghanistan and UNODC aiming to strengthen border police and border posts.

The executive director of the (UNODC), for her part, hailed the efforts made by Iran in line with fighting drug trafficking and the related crimes.

She described Iran as an important country for UNODC which has so far taken extensive measures for fighting illicit drug trafficking and the related crimes.

Waly praised Iran's narcotics discoveries, saying restitution of property gained through corruption is an important issue for the UNODC.

UNODC is ready to establish cooperation with those who are interested in this field, she reiterated.

Baharvand is currently on a visit to Vienna to attend the IAEA Board of Governors meeting.