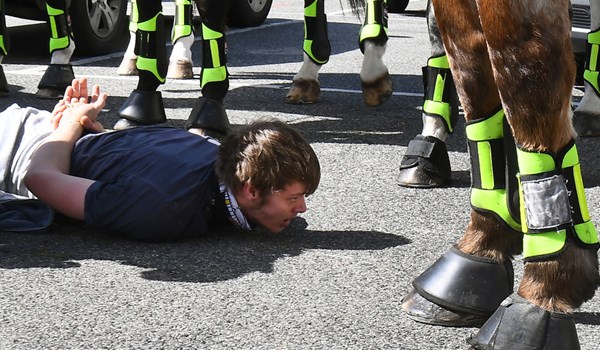 TEHRAN (FNA)- A Victoria man was left in a medically-induced coma after a brutal arrest in which police hit him with a cruiser before one of the responding officers stomped on the man’s head as his colleagues held him down.

The man, identified as Timothy Atkins, reportedly lives with bipolar disorder and had been waiting for more than a day for mental health help inside the nearby Northern Hospital in Epping, just north of Melbourne, before he gave up and walked out, RT reported.

The hospital called the police on him, who arrived a short time later at approximately 4:10 pm local time on Sunday.

Civil rights groups are calling for an independent inquiry into the responding officers after harrowing footage of the extremely violent incident was shared online.

In the first video, Atkins is seen walking through stopped traffic before he turns and walks away from an oncoming police car, which then accelerates into him and knocks him to the ground.

Another eyewitness video shot several minutes later shows at least five police officers attempting to restrain Atkins before one of the group stomps on his head.

“Are you f**king kidding me?” a bystander yells.

Atkins was rushed to hospital shortly after the arrest and put into an induced coma.

“It is like watching a video from America or Beirut,” Atkins father told the Herald Sun, adding that his son has severe mental illness but does not have a history of violence.

“Police are not above the law, they should be held accountable. They were kicking him and he wasn’t even fighting back. It was extremely excessive,” he noted.

A Victoria police spokesperson confirmed that OC spray was used during the arrest and that the senior constable from the Critical Incident Response Team who stomped on the man’s head has been suspended pending review.

“During the highly dynamic incident a police officer was assaulted and OC spray was deployed before the 32-year-old man, of no fixed address, was arrested and subsequently taken to hospital for assessment,” a spokesperson for Victoria police said, adding that Atkins “damaged a police car”.

The police professional standards command has launched an investigation into the arrest and Atkins' family is considering taking legal action against Victoria police.

Reaction online has been one of revulsion and disgust, as Victoria police come under even more scrutiny for heavy handed and often violent policing in recent weeks following a number of high profile incidents.

“At the point where he’s walking away from them, what possible justification can the police have for driving into him? Other than if that person is going to cause a terror event,” Gregor Husper, lawyer for watchdog group the Police Accountability Project, announced.