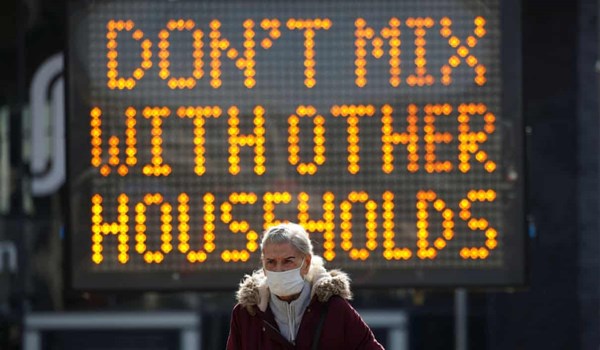 TEHRAN (FNA)- People in England’s 10 worst-hit coronavirus hotspots were unable to get tests on Monday, leading to claims of a “shambles", according to a report.

Those trying to arrange a test in the areas with the highest infection rates were told that none were available at walk-in centres, drive-through facilities or for home delivery, The Guardian reported.

One official said there was capacity and swabs available at testing centres, but that a backlog in laboratories meant people were being told that no tests were available.

It came as Nicola Sturgeon accused Matt Hancock, the Health Secretary, of trying to restrict the number of people in Scotland who could get tested as the system was overwhelmed with demand.

Scotland’s First Minister stated that Hancock wanted to limit the number of slots available for testing in Scottish mobile and regional test centres, but his Scottish counterpart, Jeane Freeman “managed to avoid that happening” during talks over the weekend.

Sturgeon and Vaughan Gething, the Welsh Health Minister, both expressed serious concerns about the testing backlog on Monday.

It emerged at the weekend that the government’s Lighthouse laboratories were trying to clear a backlog of 185,000 tests and that some were being sent to Germany and Italy to be processed.

Gething noted the Welsh government would begin processing its own tests from areas with high infection rates as he expected the national problems to last for “a number of weeks”.

He added, “This is happening at a particularly difficult time for all of us. If Matt Hancock were here today I don’t think he’d pretend it is acceptable. It is a matter to be resolved as urgently as possible but I don’t think it’s going to be resolved for a number of weeks.”

Ministers have previously promised to prioritise testing in COVID hotspots but people trying to book swab tests in the worst-hit areas were told on Monday that it was not possible, LBC reported. The issue covered Bolton, Salford, Bradford, Blackburn, Oldham, Preston, Pendle, Rochdale, Tameside and Manchester.

Jon Ashworth, the shadow health secretary, said the system hailed by Prime Minister Boris Johnson as world-beating was “not just any shambles [but] now a world-beating shambles”.

Local officials in hotspot areas stated that the national testing programme had “gone into complete meltdown” over the weekend, with symptomatic people turned away from otherwise quiet testing centres and others told to drive miles from home for a test.

There was also anger that local authorities had apparently not been told walk-in centres were now appointment-only, a change that seems to have happened without notice on Friday.

Three walk-in centres in Oldham began turning people away at the weekend if they had not booked, including symptomatic children. Oldham council had previously been advising anyone concerned about coronavirus, including those without symptoms, to get tested but was not told about the change of policy.

The council leader, Sean Fielding, said local authorities had been “completely undermined by incompetence” in Whitehall, adding, “The complete lack of courtesy to local authorities when they are changing the rules for testing centres within our boroughs is disgraceful."

A further issue emerged in Bolton on Saturday when a mobile testing unit failed to turn up. The no-show by a private contractor reportedly left dozens of people waiting for hours in a car park before being sent home without a test, leaving the council to apologise.

Yasmin Qureshi, the Labour MP for Bolton South East, stated that the situation was “completely unacceptable” and called for an “urgent and dramatic” increase of testing in the town.

Bolton has 171 coronavirus cases per 100,000 people, by far the highest in England and higher than Leicester’s rate of 135 cases when it went into local lockdown on 29 June.

A spokesperson for the Department of Health and Social Care noted, “It is wrong to say testing is not available in these areas, and our capacity continues to be targeted where it is needed most", adding, “Whilst we are seeing significant demand, over a million tests are being processed every week – with around 200,000 every day on average over the last week.”