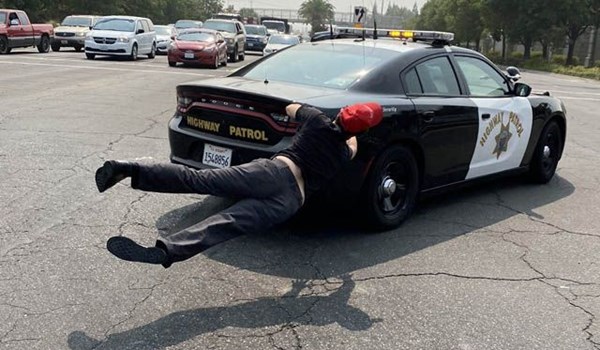 TEHRAN (FNA)- A protester, at an anti-Donald Trump demonstration in California, was injured after being thrown from the roof of a Highway Patrol vehicle.

The demonstrator climbed onto the hood of the vehicle at the protest in Sacramento where Trump visited on Monday, The Independent reported.

Video from bystanders shows that the officer continues to drive and after being carried along for several feet, the protester falls from vehicle, hitting the ground hard.

He is then seen lying on the ground awaiting medical aid.

The assembled crowd applauded when a Metro Fire paramedic team arrived and loaded the injured man onto a stretcher.

The Sacremento Bee reports that CHP officers were on site responding to an incident in which another car had struck at least two anti-Trump protesters nearby.

That vehicle was stopped by law enforcement officers shortly afterwards. One person from that incident was also taken away in an ambulance.

CBS 13 reports there was chaos outside McClellan Park, where the president was attending a briefing on California’s wildfires.

Trump supporters reportedly showed up to greet the president, but were met by a number of counter protesters.