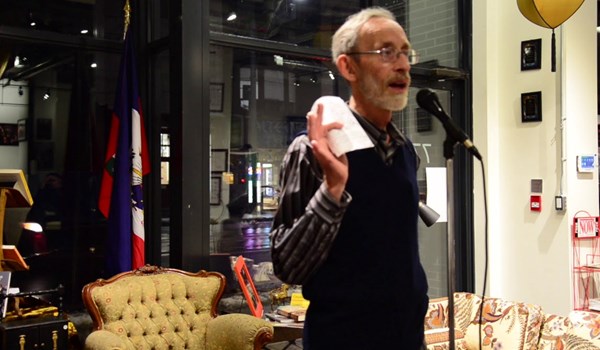 TEHRAN (FNA)- Eric Walberg is known worldwide as a Canadian journalist specializing in the Middle East, Central Asia and Russia.

A graduate of University of Toronto and Cambridge in economics, Walberg has been writing on East-West relations since the 1980s. He has lived in both the Soviet Union and Russia, and then Uzbekistan, as a UN adviser, writer, translator and lecturer. Presently a writer for the foremost Cairo newspaper, Al Ahram, he is also a regular contributor to Counterpunch, Dissident Voice, Global Research, Al-Jazeerah and Turkish Weekly, and is a commentator on Voice of the Cape radio.

Iran’s 16th Resistance International Film Festival has held an interview with him. The excerpt of the interview follows:

Resistance International Film Festival:  What do you think about the role of independent producers and directors to promote the truth, peace and reality via an independent film festival such as Resistance Film Festival? Is it possible at all while we see the US hegemonic hollywoodian invasions?

Walberg: These festivals are all the more important now, especially because of the hegemony of US films. The mainstream festivals like TIFF in Toronto have only a small niche for progress films. The best festival here is HotDoc, the Toronto documentary film festival, where many anti-imperialist films produced independently are shown. And the Toronto Palestinian Film Festival, which traditionally has been held after TIFF.

Q: Why in Hollywood generally we face that much hatred of Iranians and Muslims and what’s in your eyes the true way of reacting to that Islamophobia and Iranophobia?

A: The prejudice against Iran and Muslims in general is a product of the force of American culture, which breathes imperialism, much as in Rome, Roman citizens assumed that the Roman empire was eternal, the will of God.
Muslims are by faith anti-imperialist. Even the great Muslim empires of the past -- Abassids, Sassanids, Moghul, Ottoman -- were never attempting to seize the whole world, like the British et al, and never forced citizens to abandon their faith if they were not Muslim.

The injustice of Palestine ensures that Muslims will resist the colonialist Israel regime, and US-Israel as a whole. Iran stands out as the most outspoken critic of empire, and is thus the target of unremitting propaganda defaming the country.

This recapitulates the hostility of the West to the Soviet Union, which likewise was anti-imperialist and resisted US-Israel. It was similarly vilified and finally succumbed to the pressures against it.

Q: When we watch American movies of 50 years ago, we are able to identify American traditional familial values. Things that are totally absent in Hollywood while some directors focus on sex and violence and some others try to make a “fake” history for homosexuality. Giving us some examples of that, can you tell what your comment is?

A: I just watched Darling (1965), starring Julie Christie, who earned an Academy Award for her role. Dirk Bogarde is a TV journalist who interviews her on the street and falls in love and abandons his wife and children. Christie in the typical swinging '60s, has affairs and befriends a gay photographer, and then is angry when he goes off for sex. Bogarde calls her whore for sleeping around. The subtext is she is dissolute like the gay photographer. The film shows the lifestyle for its tawdriness, and shows the revulsion when one becomes aware.
Now such promiscuity is celebrated in films, and a gay lifestyle is celebrated in films such as Call me by your name (2017) and Love, Simon (2018). That is the new Hayes Code, the need to self-censor. 'Gay is good' and promiscuity and abortion the new norm.

There still are films promoting a moral, ethical lifestyle. Presumed Innocent (1990) and The Human Stain (2003) are two that expose corruption and hypocrisy, have little sex and violence. I watched these recently and was moved. You have to look for them as neither of these films reached wide audiences. It is hard to generalize, but the prevailing norm of popular films is one of sex and violence.

Q: What’s your view on the perspectives that Iranian films give to the world? How about those which have been awarded by Oscar, Cannes, Berlin or other western film festivals? Do you think there’s a political tendency to choose specific films from Iran or other Muslim majority countries, which present these societies in the same way that West’s mainstream media do?

A: Iranian films are rarely seen here, but I keep my eyes open and see them whenever possible. They are first class. Unfortunately, Hollywood rules the roost. Foreign language films in general are rarely seen or promoted. That is the way of mass commercial culture. You must look hard to find the nuggets of uplifting cinema, without a pro-war, pro-US subtext.

Q: Can you please mention 5 topics that American and European films don’t pay attention to and they should?

A:1/ a defense of family values and promotion of a healthy lifestyle
2/ a promotion of peace and protest against warmongering
3/ an alternative view of history from eastern, i.e., Muslim and Buddhist perspectives
4/ a promotion of Islam as the way of peace
5/ more exploration of alternative futures, utopias, postindustrial, ecologically inspired society

Q: How about the role of documentary cinema in all that?

A: I have been able to see hints of most of those topics at HotDocs and films from the Sundance Festival. Documentary films dealing with these topics are useful, as they personalize these abstractions, which risk being dismissed as platitudes.

Spaceship Earth is a 2020 American documentary film about the 1991 experiment that saw eight individuals spend two years quarantined inside of a self-engineered replica of Earth's ecosystem, dubbed Biosphere 2, which premiered at the Sundance Film Festival in January 2020. Watching a documentary about Biosphere 2 brings to life the idea of creating a sustainable environment.

There are many documentaries being made now showing the plight of natives around the world as capitalism and western commercial culture eat away at their homes and traditions. Documentary films are one of our best weapons in the fight for a better world.