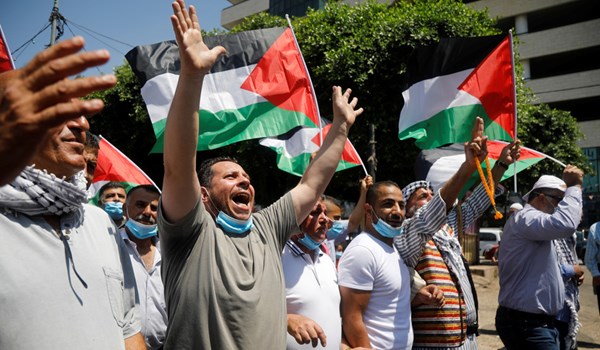 Bahrain on Friday and the UAE on August 13 were announced to have reached agreements, brokered by Washington, on normalizing ties with the Israeli regime, presstv reported.

The White House seeks to hammer out more similar deals between Arab states and Israel.

The agreements have so far received uniform condemnation from all Palestinian factions, who call them a stab in the back of the Palestinians and a sheer betrayal of their cause.

Abu Dhabi and Manama have agreed to formalize the agreements at a ceremony on Tuesday at the White House.

On Monday, the premier of the West Bank-based Palestinian Authority (PA) once again denounced the normalization agreements and said signing them would amount to a “black day” for Arabs in general and for Palestinians in particular.

“Tomorrow, we will witness a black day in the history of the Arab world, of defeat for Arab League institutions, which are not united but divided,” Shtayyeh said during the weekly meeting of his PA cabinet.

Failing Palestinians, the Arab League on September 9 refused to approve a draft resolution put forth by the PA that would condemn the highly controversial UAE-Israel normalization deal.

“This will be another date to add to the calendar of Palestinian misery,” the Palestinian prime minister further noted, adding that the PA would have to “correct" its relationship with the Arab League for its refusal to dismiss the two deals.

The PA has already called for mass protests to be held on Tuesday, urging other Arab states “not to take part in celebrations” for the signing ceremony in Washington.

Egypt in 1979 and Jordan in 1994 signed peace treaties with Israel.

On Sunday, Mahmoud al-Zahhar, the co-founder of the Palestinian resistance movement Hamas and a member of its political bureau, called for the formation of an international bloc against the Israeli-American alliance and its tools in the Middle East region, the Palestinian Information Center reported.

He stressed that the normalization agreements reached by the UAE and Bahrain constituted a “treacherous stab” in the back of Palestinians, adding that Abu Dhabi and Manama had lined with Tel Aviv and became parts of its overt conspiracy to liquidate the Palestinian cause.

“The precise timing in which the Emirati-Zionist agreement emerged confirms the nature of the black scheme whose chapters are being woven to reconstruct and reshape the geographical and political landscape in the region, which works to dry up the sources of strength and steadfastness in the nation,” he announced.

The Hamas official also called for the formation of a firm and united front, composed of all Arab and Islamic nations, to isolate and besiege the rulers of the UAE and criminalize their shameful deeds.

Zahhar also called for imposing a political and economic boycott on Emirati rulers, cutting off all forms of communication, and levy penalties on everyone who deals with them.

TEHRAN (FNA)- Iranian Diplomatic Mission in the European Union urged the international community to take active stance in the face of bullying on the global scene in a bid to preserve rule-based world order.
﻿
﻿
Sections