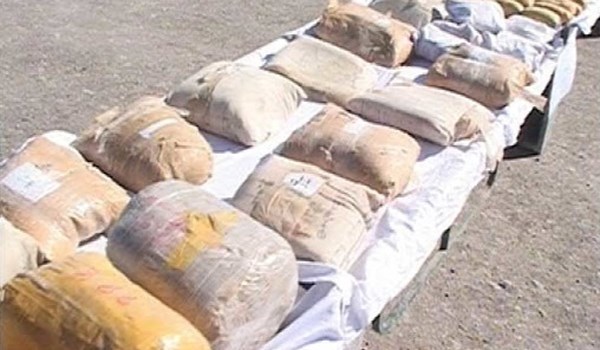 “Our guards gathered intelligence on the activities of a drug-trafficking gang on Mirjaveh border region,” Chief of Sistan and Balouchestan Border Guards Brigadier General Mohammad Mollashahi said, adding, “and found out that the smugglers wanted to transfer the drugs to the Central and Northern parts of the country.”

“The forces ambushed the hideout of the smugglers on Saturday and seized the drugs including 637kg of opium and 299kg of hashish,” Mollashahi went on to say.

Ghanbari said that the police forces of the province clamped down on drug trafficking bands and confiscated 2609 kg of opium, 19 kg of heroin, and 10 kg of crystal in Iranshahr and Saravan Counties.

He added that seven smugglers have also been arrested and handed to the judiciary during the operations.

Iran is in the forefront of the fight against drug trafficking and thousands of Iranian police forces have been so far martyred to protect the world from the danger of drugs.

The Iranian anti-narcotic police have always staged periodic operations against drug traffickers and dealers, but the latest reports - which among others indicate an improved and systematic dissemination of information - reveal that the world's most forefront and dedicated anti-narcotic force (as UN drug-campaign assessments put it) has embarked on a long-term countrywide plan to crack down on the drug trade since several years ago.

The Iranian police officials maintain that drug production in Afghanistan has undergone a 40-fold increase since the US-led invasion of the country in 2001.

Afghan and western officials blame Washington and NATO for the change, saying that allies have "overlooked" the drug problem since invading the country 19 years ago.