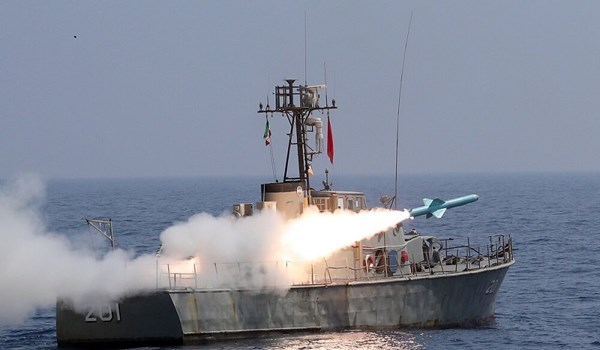 TEHRAN (FNA)- Great Zolfaghar-99 drills wrapped up in waters East of the Strait of Hormuz on Saturday with a parade of surface and subsurface vessels.

The ceremony was held in the presence of Iranian Army Commander Major General Seyed Abdolrahim Mousavi and some of the Iranian Navy’s senior forces as well as observers from Khatam al-Anbiya Defense Base.

A variety of surface and subsurface submarine units of the Navy including destroyers, missile launchers, and submarines of Tariq, Qader and Fateh submarines marched displaying their power to the world.

Aircrafts of the Iranian Army Air Force accompanied the surface and subsurface units.

The drills covered an area of two million square kilometers in the Eastern waters of the Strait of Hormuz, Makran coast, Oman Sea and North Indian Ocean up to 10 degrees North.

Units of the Army’s Air and Ground Forces contributed to the maneuvers, during which tactical offensive and defensive strategies was drilled in line with the country’s agenda to safeguard its territorial waters and maritime access routes.

Spokesman for the drills said on Thursday the 69th Naval Fleet, including Sahand Destroyer and Bandar Abbas Support Ship, in the Indian Ocean provided intelligence and monitor foreign and enemy vessels.

He said that the main phases of the drill would be held with the participation of the Navy, Air Defense, Air Force, and Ground Force units in an area of 2 million square kilometers near the Eastern parts of Hormuz Strait, Makran coasts, Sea of Oman, and North of the Indian Ocean.

He added that the exercises would be held with the motto of ‘sustainable security under defensive authority’, in three different phases of intelligence superiority, tactics, and display of power.

During the drills, the Iran-made long-range drone named Simorq would take part in combat and offensive operations against enemy vessels, in addition to the reconnaissance missions, and will hit enemy vessels with smart and pin-point bombs, Rear Admiral Sayyari said.