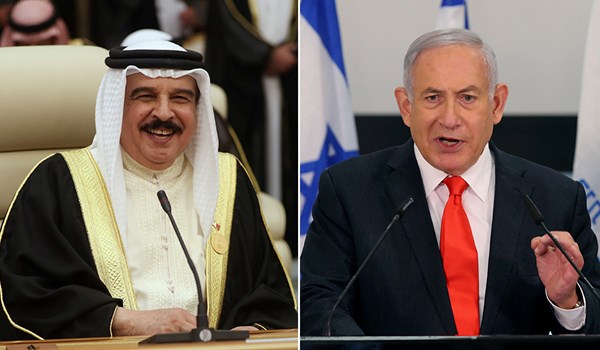 TEHRAN (FNA)- Bahrain's main opposition group, the al-Wefaq National Islamic Society, in a statement condemned a deal between Israel and Bahrain as an “ultimate betrayal of Islam and Arabs and a departure from the Islamic, Arab and national consensus".

On Friday, US President Donald Trump tweeted that the tiny Persian Gulf state of Bahrain had agreed to join the UAE in striking what he called a peace agreement to normalize relations with Tel Aviv, hailing the deal as yet another “HISTORIC breakthrough”.

The White House announced that Trump had tweeted out the news after speaking by phone to Bahraini King Hamad bin Isa Al Khalifah and Israeli Prime Minister Benjamin Netanyahu.

The American president also attached to a separate tweet a joint statement, whereby the three had agreed on and expressed commitment to “the establishment of full diplomatic relations between Israel and the Kingdom of Bahrain.”

Back on August 13, the UAE and Israel announced a US-brokered deal that laid the groundwork for the full normalization of their relations. The agreement met with uniform condemnation of all Palestinian factions, who called it a stab in the back of the Palestinians and sheer betrayal of their cause.

Bahrain has agreed to formalize the deal with Israel at a ceremony on September 15 at the White House, where the UAE would also sign off on its own thaw with Tel Aviv.