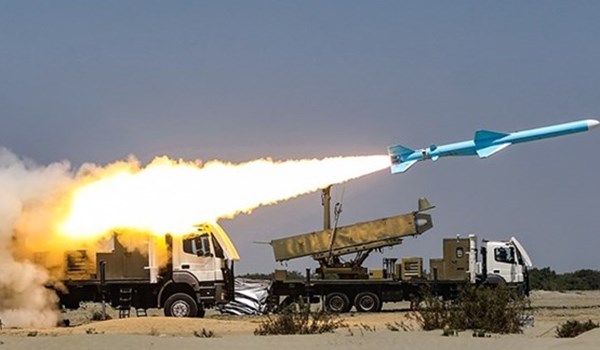 Qader has a range of 250km and can be fired from vessels and coast-to-sea launchers, as well as aircraft.

In the main stages of Iran’s Army joint military exercises 'Zolfaqar-99',  targeted hypothetical units and flotillas of the enemy were destroyed by cruise missiles.

At this stage of the war game, 'Qader' cruise missile successfully hit the target at a distance of more than 200 km which was fired from coast-to-sea missile sites of Iran’s Navy.

Spokesman for the drills Flotilla Admiral Shahram Irani said on Friday that benefitting from a wide spectrum of sophisticated naval cruise missiles in different ranges, Iran’s Strategic Navy is capable of launching effective missile fire from coast-to-sea missile sites, as well as surface and subsurface units.

Admiral Irani emphasized that today, coast-to-sea missile systems of Iran’s Navy are deployed along Southern coastal areas of the country.”

"With the unveiling of the long-range cruise missile, a giant step will be taken in missile capability of the Army and also defense doctrine of the Islamic Republic of Iran," he added.

The drills cover an area of two million square kilometers in the Eastern waters of the Strait of Hormuz, Makran coast, Oman Sea and North Indian Ocean up to 10 degrees North.

Units of the Army’s Air and Ground Forces will contribute to the maneuvers, during which tactical offensive and defensive strategies will be drilled in line with the country’s agenda to safeguard its territorial waters and maritime access routes.

During the military exercises, the Armed Forces will put to test different home-made defense systems, including drones, torpedoes, surface-to-surface and coast-to-sea cruise missiles, surface-to-air and air-to-surface missiles and rocket launchers loaded on vessels.

Spokesman for the drills said on Thursday the 69th Naval Fleet, including Sahand Destroyer and Bandar Abbas Support Ship, are currently in the Indian Ocean to provide intelligence and monitor foreign and enemy vessels.

Air Force bombers and combat drones will also conduct pre-designed missions during the exercises, he added.