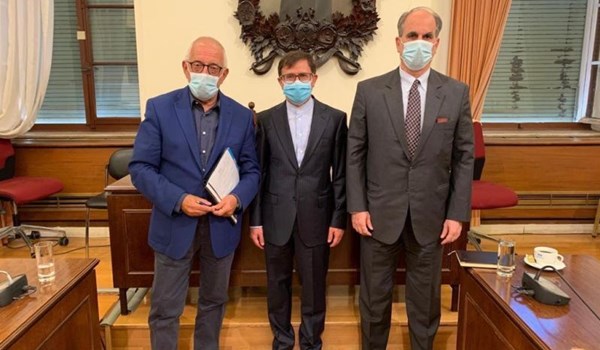 TEHRAN (FNA)- Greek Parliament's First Vice-Speaker Nikitas Kaklamanis in a meeting with Iran's Ambassador to Athens Ahmad Naderi stressed the need for preserving and implementation of the nuclear deal.

During the meeting in Athens on Wednesday, Kaklamanis said that his country backs efforts to maintain the July 2015 Iran nuclear deal, Joint Comprehensive Plan of Action (JCPOA).

The JCPOA should be implemented completely, he added.

In the meeting, the two sides reviewed international developments, US unilateral and unjust sanctions against Iran, the process of implementation of the JCPOA, from which the US withdrew in May 2019, and Washington's hostile measures against the international agreements.

Further, they stressed exchange of views through webinar due to the coronavirus pandemic.