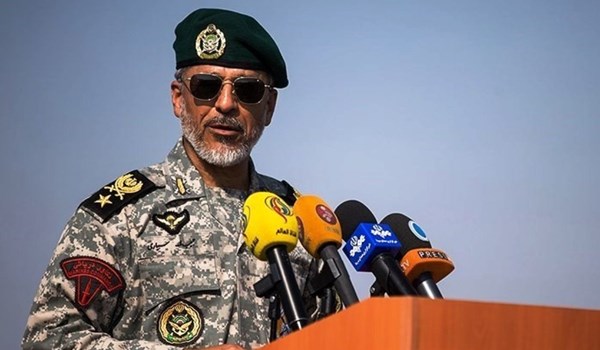 TEHRAN (FNA)- Deputy Commander of the Iranian Army Rear Admiral Habibollah Sayyari warned enemies that the country will not confine itself to West Asia region to respond to any possible threats and strategic mistakes.

“The enemies of the Islamic Republic should know that in case of any strategic mistake by them, the Islamic Republic of Iran’s geography of battle and scene of response to their measures will not be limited to West Asia region and they will face a vast scene of battle,” Rear Admiral Sayyari said on Wednesday.

The high-ranking Iranian military commanders have on different occasions warned of the country’s harsh response to any threat by enemies, specially the US.

The threat comes as TankerTrackers said it has identified three Iranian-owned and flagged vessels that might be traveling to Venezuela via the Suez Canal.

The ships named are the 35,200-dwt Forest, Fortune and Faxon (all built 2004), all controlled by National Iranian Tanker Co (NITC). The trio was part of a group of five ships that discharged Iranian products in the South American country in May and June.

Days before the Iranian ships arrived at their destination, Iranian officials warned that they would reciprocate any wrong move by the US Navy to block Iranian shipping.

In April, Commander of the Islamic Revolution Guards Corps (IRGC) Major General Hossein Salami warned the US forces against any act of sabotage to threatening move in the Persian Gulf.

“We tell the Americans that we are fully determined and serious in defending our national security, water borders, security of the shipping and our defense forces’ security and will respond to any act of sabotage firmly,” General Salami said after visiting the IRGC forces stationed on the Iranian islands in the Persian Gulf.

“We have ordered our naval units to target any vessel or combat unit of the terrorist US forces who want to threaten the security of our non-combat ships or combat vessels,” he added.

Also, in August, Iranian Defense Minister Brigadier General Amir Hatami said that cooperation between the Army Navy and the Islamic Revolution Guards Corps (IRGC) Navy guarantees security of the country against any aggression.

General Hatami made the remarks in a meeting with Iran’s Navy Commander Rear Admiral Hossein Khanzadi.

"Considering the importance of waterways in various sectors such as security, economy and the traffic of merchant ships and oil tankers, ensuring the security of water routes is an inevitable necessity," he said.

"Cooperation between Army Navy and the IRGC Navy is considered as a reliable support in fight against any aggressions and in preserving the deterrence power of the Islamic Republic of Iran in international waters," General Hatami underlined.

"Today, the Iranian Navy has the ability to use advanced equipment and weapons in the field of naval combat to have a powerful presence in maintaining security [in the region], from the shores of the Persian Gulf and the Sea of Oman to the Indian Ocean," he said, adding, "Wherever there is a need for ensuring security in international waters, the Iranian Navy can be present."

Iranian Navy has upgraded its position and role into a strategic force in the region, General Hatami added.

He added that his ministry is determined to improve the naval combat power of Iranian Navy and Navy of IRGC.

Rear Admiral Khanzadi, for his part, noted that thanks to its achieved experiences during the imposed war with Iraq and under the US sanctions, Iran Navy seeks to improve its capabilities in cooperation with the domestic defense industry.