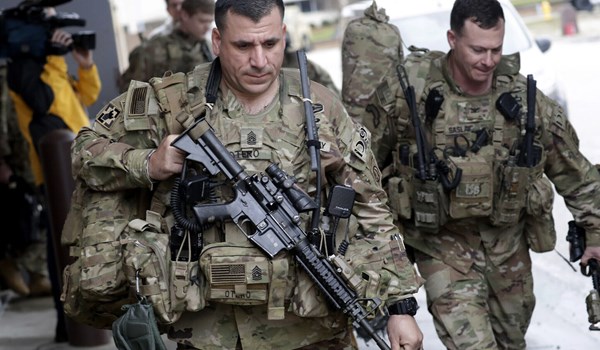 TEHRAN (FNA)- Representatives of different Iraqi groups at the parliament underlined again the necessity for the US forces to leave the country.

“The US should withdraw its forces from Iraq and avoid turning the country into a battlefield,” Mohammed Karim, the representative of Sadiqoun fraction, told the Arabic-language al-Ma’aloumeh news website.

He added that the parliament’s decision not to accept any American forces on Iraqi soil is clear.

Also, Mohammed al-Assadi, the representative of al-Fatah coalition, said that members of the coalition have informed Iraqi Prime Minister Mustafa al-Kadhimi of their opposition to the presence of the US forces.

Meantime, Hassan al-Jinabi, the representative of Araqioun coalition, said that the Iraqi parliament has approved the bill to expel the foreign forces, warning that presence of American soldiers in Iraq stirs tension.

Iraq's Parliament voted in January to have the US troops removed from the country, heeding a call from former Prime Minister Adil Abdul Mahdi to take urgent measures and end the foreign forces presence as soon as possible.

The Iraqi Parliament passed a resolution anonymously to work to end the foreign troop presence in the Arab country in the wake of a US targeted assassination of a top Iranian general and a commander of Iraqi popular forces.

"The government commits to revoke its request for assistance from the international coalition fighting the Islamic State of Iraq and Levant (ISIL) due to the end of military operations in Iraq and the achievement of victory," the resolution read, adding, "The Iraqi government must work to end the presence of any foreign troops on Iraqi soil and prohibit them from using its land, airspace or water for any reason."

The resolution stated that Iraqi military leadership has to report the number of foreign instructors that are necessary for Iraqi national security.