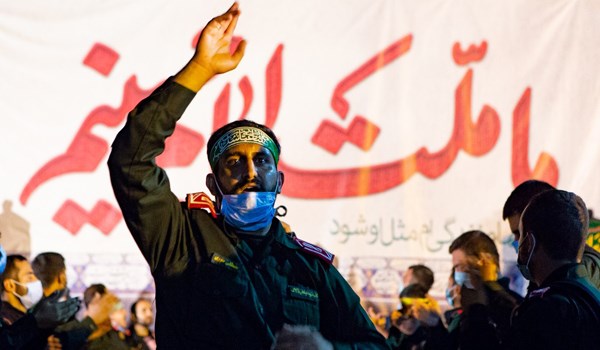 TEHRAN (FNA)- People across Iran on Saturday mourned Tasoua, the 9th day of the lunar month of Moharram, a day before Imam Hossein (PBUH) was martyred in the battle of Karbala nearly 14 centuries ago.

This year's Moharram mourning ceremonies differ from previous years due to the outbreak of the coronavirus global pandemic, also known as COVID-19.

Tasoua comes a day before Ashoura, which marks the day when Imam Hossein (PBUH) and 72 of his companions were martyred in the unjust battle imposed by the second Umayyad caliph in Karbala, Yazid, nearly 14 centuries ago.

Every year, Muslims across the globe, including in Iran, take to the streets in black clads mourning over his martyrdom, reading prose and poetry and beating their chests. But this year the National Coronavirus Combat and Prevention Headquarters has issued a long list of strict orders for all religious bodies and Husseiniyahs (Imam Hossein Mourning Centers) across the country to observe anti-coronavirus and social-distancing protocols.

On the 10th of the month of Moharram, in the 61st year of the Islamic Calendar (680 ACE), in a barren land (which is now the city) of Karbala, some 100 kilometers Southwest of Baghdad, Imam Hossein (PBUH) - the grandson of the Prophet Mohammad (PBUH) and the third Imam of Shiite Islam - was savagely slaughtered in battle and rose to martyrdom.

The Battle of Karbala was the result of Imam Hossein (PBUH)'s attempt to liberate the people of the region from the tyrannical rule of the second caliph of the Ummayad Caliphate, Yazid I. Over the days preceding his martyrdom, Imam Hossein (PBUH) and his small caravan of friends and family (between 72 and 124 men) were surrounded by Yazid's army of thousands (over 30,000 armed men). They were ultimately forbidden access to water for three days, and on the tenth day (Ashoura), Yazid's army attacked in full force, killing all 72 of Imam Hossein (PBUH)'s closest companions, including his six-month old son. The final and most brutal casualty of Karbala was Imam Hossein (PBUH) himself, who sustained countless unimaginable wounds from arrows, stones and swords before his throat was cut off and he was decapitated while he was prostrating before the Lord in prayer. Thus, on that day, Imam Hossein (PBUH) rose as a martyr and has remained so for over a thousand years.