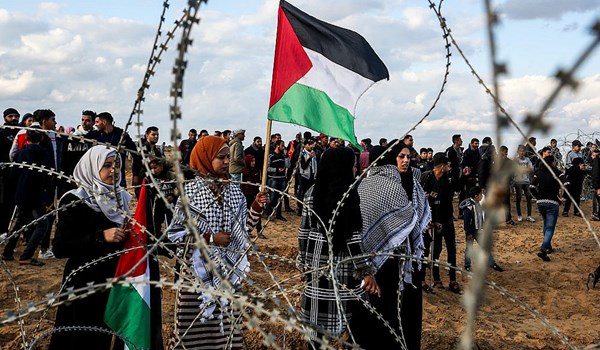 TEHRAN (FNA)- Few tragedies can be more extensive than the stunting of life in the besieged city of Gaza, few injustices deeper than the denial of an opportunity for nearly 2 million Palestinians to seek health services or strive or even to hope, by a criminal blockade deliberately imposed on them by Israel, falsely identified as self-defence by its Western allies, in particular the Christian-Zionists in the United States.

The tragedy of Gaza is that no Palestinian is to blame, whether stuck in a time of pain or of suffering. The tragedy of Gaza is that its long-suffering people are alone even if they have a seat at the United Nations. For a life in the past cannot be shared with the present. Their city has been stuck in time and ruins and it got stuck alone, unable to move or trade with the outside world.

Western powers know that the tragedy of Gaza is not glamorous. Western media outlets likewise know that the city’s never-ending woes don’t play out in their news as it does on a stage or between the pages of a book. It is a punishment meted out for the Palestinian resistance and a crime conferred. Its horrors are not attributable to one single actor named Israel. The tragedy of Gaza is ugly and tangled, man-made and intentional with many actors playing on the stage and between the pages of newspapers, and between the corridors of power in the East and the West.

Here, for Israel and its Western and Middle-Eastern minions, actions are the first tragedy in Gaza, words are the second. Words are perhaps the worst. Words are merciless. Hate is a bottomless cup; they will pour and pour and pour. In the form of financial and diplomatic support for Israeli air and ground forces attacks while continuing to tighten the devastating blockade on the besieged territory. Their latest bombings, ostensibly targeting the resistance group Hamas, are only intended to kill as many civilians as possible, again largely ignored by the Western corporate media.

They never bother to say why desperate Palestinians are using balloon-borne incendiary and explosive devices, as well as some rockets, launching them from Gaza into Israel, causing dozens of brushfires. They never bother to ask why Israel has a disproportionate response with all those Western warplanes and tanks, targeting the densely-populated Gaza with great impunity.

Instead, they justify that Israel has the right to tighten its criminal blockade on Gaza with economic, financial and diplomatic help from the West, even prohibiting the importation of food, medicine and fuel for the territory's only power plant. Tel Aviv has even closed the Kerem Shalom border crossing with Gaza, part of an effort to deprive its people of fuel in retaliation for the balloon and rocket attacks. The crossing is the sole point of entry for goods between occupied Palestine and Gaza.

In between, it’s a waste of time - and face - for UNRWA, the United Nations Relief and Works Agency for Palestinian Refugees in the Near East, to respond to the Gaza tragedy by calling on "all concerned parties to maintain a supply of electricity that is sufficient to meet the basic needs of the civilian population," citing "14 years of an illegal blockade and the socio-economic impact of the Covid-19 pandemic".

The world body knows that the unlawful closure of the power plant has caused the power feed to decline to two or three hours per day, followed by 21 hours of interruption amid the pandemic. It also knows full well that such poor power feed has negatively impacted the wellbeing and safety of the people of Gaza. It has also had devastating effects on Gaza's vital services, including hospitals, thus putting the lives and health of nearly 2 million people, including 1.4 million registered Palestinian refugees, at risk. Yet the world body only limits itself to lip service.

The nearly 2 million people of Gaza - more than half of whom live in poverty, according to the United Nations - have been subjected to a brutal blockade since 2007 over acts of resistance. They want to have a say in their own future government and they want to see a Palestine free from occupation and terror, yet Israel and its minions maintain a physical and economic stranglehold on the enclave. With help from the United States, the usurper regime has launched three major wars against Gaza since 2008, killing and wounding thousands of civilians while destroying much of the territory and displacing many thousands more.

All this and more says why the tragedy of Gaza is so severe, forcing human rights activists often to refer to it as the "world's largest open-air prison," a description echoed by world leaders on several occasions at the UN General Assembly, as well. As things stand, the tragedy of Gaza is still happening in such a criminal manner that it hurts the human conscience by its crude violence, its absolute incoherence, its absurd want of meaning, its entire lack of justification under international law and the international humanitarian law.

The sad part of all this is that the United Nations’ member states and the international civil society are no longer the actors, but the spectators of this tragic play. Or rather they are both.