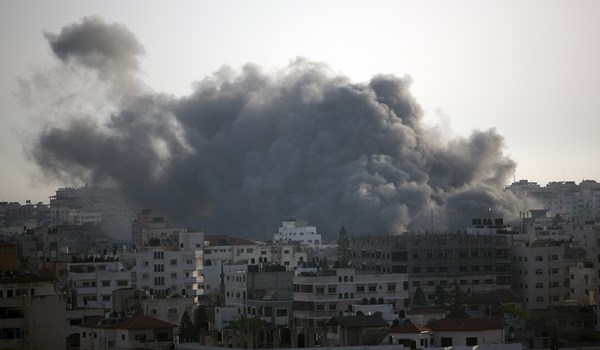 TEHRAN (FNA)- Israeli tanks have once again shelled civilian objects in the Gaza Strip in what the usurper regime claimed was a response to continuing waves of incendiary balloons sent across the fence to nearby illegal Israeli settlements.

The continuing violence - which has stretched into two consecutive weeks - comes despite attempts by Egyptian security officials to end the flare-up, which has seen two weeks of rocket and fire-balloon attacks from Gaza and nightly Israeli raids.

As part of measures to suffocate Gaza, Israel has also banned fishing off Gaza's coast and closed the Karam Abu Salem goods crossing, cutting off deliveries of fuel to the territory's sole power plant.

Power had been in short supply even before the shutdown, with Gazans having access to electricity for only about eight hours a day. The Gaza Strip has a population of two million, more than half of whom live in poverty, according to the World Bank. The Palestinian territory has been under an Israeli blockade since 2007.

This should put everybody at the UN on notice. They should tell Israel and its allies what they have done to Gaza by thwarting the will and wishes of the world community and by violating international law and the UN Charter. They should wake up to the nightmare of humanitarian crisis in the Strip.

Today, the blockaded Gaza is still suffering - just like Yemen. The foreign policy establishment in the West insists it has a lock on wisdom, but a new report by the UN points out otherwise. It conforms that Gaza’s infrastructure continues to deteriorate at an alarming rate while basic services, including in health, water and electricity are eroding.

The world should never be ashamed of doing the right thing by exposing the Israeli myth. Its attacks on Gaza are immoral and the world should decide on what is right and stick to it. The UN must show the moral backbone to comprehensively address the violence and its root causes, which is Israeli occupation and terror.

The UN should turn its reports into meaningful measures and call on Tel Aviv to take responsibility for its crimes and stop the violence. This is the same violence that also has the full backing of the United States.

There’s a lesson to be learned here and the lesson is this: In this deadly violence, the only thing necessary for the triumph of evil is for good men to take sides. The UN should resume serious talks and draw up a nationwide referendum roadmap in Palestine, instead. Supporting two parallel governments vying for territory won’t bring a swift end to the violence; it won’t make a difference for Gaza’s people.

The powerful reality is that some governments and “fakestream” media outlets are still presenting falsehoods, fabrications, and obsolete assumptions to go further. The result is an absence of verifiable, unbiased information emerging from Gaza; and consequently, a deliberate attempt to prolong the unnecessary instability, death and destruction for Israeli occupation and profit.

To America’s credit and its co-conspirators in the Middle East, in terms of lives lost and damaged and treasure wasted, the cost of their illegal support for Israel has been immense. The consequences have been devastating for Gaza’s population, too. The situation will only get worse, unless meaningful action is taken by the UN to immediately correct this historic mistake.

The real story of this human tragedy is the criminal complicity of the major powers. The US government might express a modicum of disagreement with Israel, but still it acts in every way to ensure that Israel is able to carry out attacks on Gaza.

If the US ever wanted to stop the misery in Gaza, it should have stopped signing the cheques that ensure Israel can arm itself to carry out attacks on the Palestinians. It's tragic that the US has always been doing the opposite, no matter it has been an Obama administration or a Tump administration in power.