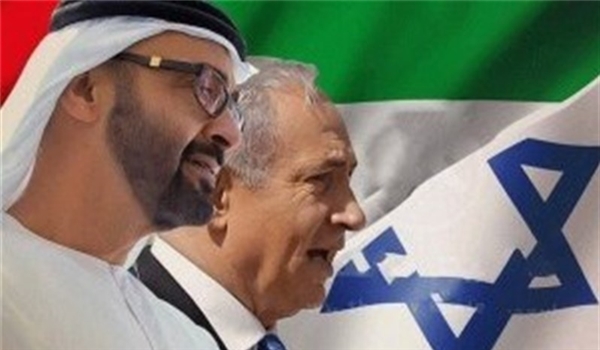 Zarif made the remarks on Friday in a meeting with his Lebanese counterpart Charbel Wehbe in Beirut.

This was the Iranian top diplomat’s first reaction to the agreement that US President Donald Trump announced on Thursday. The agreement has been strongly condemned by Iranian officials, Palestinian groups, and several regional countries.

In a relevant statement on Friday, the Iranian foreign ministry strongly condemned the UAE's decision to set up diplomatic relations with "the Zionist regime of Israel" and termed it as a strategic act of idiocy by Abu Dhabi and Tel Aviv which will undoubtedly result in the further reinvigoration of the axis of resistance in the region.

The statement further stressed that "the oppressed nation of Palestine as well as other freedom-seeking peoples worldwide will never forgive the sin of normalization of the ties with the occupier and bloodthirsty regime of Israel and also the act of those who approve and cooperate with its crimes".

Undoubtedly the innocent bloods shed during the past seven decades of resistance to free the sacred land of Palestine which is Muslims' first Qibla will sooner or later take those that betrayed the Palestinian cause by the throat, it added.

The statement also stressed that the Islamic Republic of Iran considers as dangerous Abu Dhabi's act of normalizing ties with the fabricated, illegitimate and anti-human regime of Israel, and warns the Zionist regime against any kind of meddling in the Persian Gulf region's equations.

The UAE administration and all other governments which approve of this move should be ready to take the responsibility of all the consequences of such a measure, it further said.

The Iranian foreign ministry's statement also noted that the history will definitely demonstrate how this strategic mistake by the Zionist regime and the dagger which stabbed both the Palestinian nation and the Muslim peoples in the back will backfire and further strengthen the resistance axis by enhancing unity and solidarity against the Zionist regime and the backward governments in the region.

The foreign ministry advised those rulers who, from inside their "glass castles", hatch plots against the Palestinians and other regional oppressed nations, including Yemen, to regain consciousness and stop erring in distinguishing between friends and foes.

US President Donald Trump on Thursday announced a deal brokered by his government between Isreal and the UAE which he said would lead to full normalization of ties between the two.

In relevant remarks earlier, Iran's Minister of Culture and Islamic Guidance Abbas Salehi in a strong reaction to the official recognition of the Israeli regime by the United Arab Emirates (UAE) said "Deal of Century" has been reduced to a humiliating agreement.

Salehi made the remarks in a Twitter message on Friday.

Commenting on the normalization of ties between the UAE and the Zionist regime, the Iranian culture minister said that "they were reduced from 'Deal of Century' to give consent to a trivial agreement namely the recognition of Israel by the UAE!!! A mountain which gave birth to a tiny mouse!"

The US, the UAE and the Zionist regime in a joint statement on Thursday, announced the official establishment of ties between Abu Dhabi and Tel Aviv.

The statement claimed the Zionist regime will stop annexation of occupied Palestinian lands in return for the normalization of ties with the UAE.

Critics see the agreement as an attempt by US President Donald Trump to save his ailing presidential campaign against the Democrat candidate Joe Biden.

TEHRAN (FNA)- On the 40th anniversary of Iraq’s invasion of Iran, Supreme Leader Ali Khamenei proclaimed on September 21 that the eight-year war was an Iranian victory against the major powers. [POSTER]
﻿
﻿
Sections