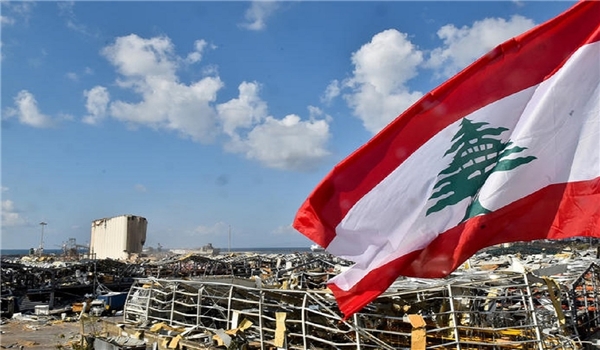 “Countries must not condition their aids to Lebanon to certain political developments,” Zarif said on the sidelines of his meeting with his Lebanese counterpart Charbel Wehbe, adding, “We believe it is not humane to use current conditions for political purposes.”

He vocied Iran’s solidarity with the people of Lebanon over the recent devastating explosion in Beirut.

“The Islamic Republic of Iran will stand by the Lebanese people and government and help any decision taken by the Lebanese,” added Iran’s top diplomat.

He arrived in Beirut to express solidarity with the Lebanese government and nation over the huge blast in the capital on August 4.

Iran strongly denounced foreign elements that are provoking unrest in Lebanon to attain specific goals after the August 4 massive blast in Beirut, saying that Lebanese government is in need of calm to handle the situation.

“The Beirut blast was a huge catastrophe and it is normal that people are shocked by the incident; yet, it is not acceptable that certain individuals, groups or countries are misusing the situation to gain their political wishes,” Foreign Ministry Spokesman Seyed Abbas Mousavi said on Monday.

The spokesman went on to say that Lebanon urgently needs solidarity and assistance, not foreign intervention, and stressed the need for letting the Lebanese government handle the crisis and alleviate the people’s sufferings.

Mousavi added that a high-ranking Iranian official will visit Lebanon in the coming days.

“The Islamic Republic of Iran has been standing by the Lebanese people and government since the early hours of the incident,” he further said.

Several aid cargoes have so far been sent to Beirut and more will be on the way, the spokesman noted.

The US Embassy expressed its solidarity with anti-government demonstrators in Lebanon, after angry mobs of people stormed several government buildings and clashed violently with police in the streets of Beirut.

Thousands of people gathered at Martyrs' Square in Central Beirut on Saturday, demanding the government to resign after the horrific explosion on Tuesday that killed and wounded thousands. Amid clashing with riot police, violent protesters stormed several government buildings in the city, breaching the Foreign Ministry, the Economy Ministry and the Ministry of Water and Energy premises.

Demonstrators threw rocks and projectiles at the officers, who responded by employing tear gas. The Lebanese Army was also deployed in Beirut later to help police restore order.

The number of injuries climbed to at least 500, according to the emergency medical services cited by Al-Manar TV. Authorities announced that 70 security officers were injured and at least one them died in clashes.

Even though, rallies and violence continue in several US cities over the police killing of George Floyd, and the US police and federal agents’ brutality against peaceful demonstrations has gone to the extreme in recent months, the US embassy in Beirut wade into the crisis in Lebanon on Saturday, voicing its support for the citizens’ “right to peaceful protest”.

"The Lebanese people have suffered too much and deserve to have leaders who listen to them and change course to respond to popular demands for transparency and accountability," the embassy said, and added, "We support them in their right to peaceful protest, and encourage all involved to refrain from violence."

The violent protests came as a large part of the city lies in ruins, with many victims still feared trapped under the rubble, Lebanese Prime Minister Hassan Diab noted that he was going to request an early parliamentary election as the only way to resolve the crisis.

While rallies over the dire economic conditions in Lebanon were underway before the incident, the Beirut tragedy came to be a ploy for the anti-government camp.

A mega explosion rocked the Lebanese capital on Tuesday August 4. Terrifying footage showed a huge mushroom cloud of fire and smoke covering much of Beirut’s port area, blowing out windows and destroying buildings in the neighborhood, as a warehouse at the Beirut docks caught fire on Tuesday afternoon. Photos on social media showed many buildings in the area damaged or destroyed, leaving residents covered in glass and blood.

Lebanon's Ministry of Health announced that 171 people have been killed in the blast at Beirut's port on August 4, while more than 6,000 others have been injured. The explosion left 300,000 homeless, as vast part of the city has been fallen into ruin. Red Cross volunteers at the scene of the explosion declared they expect the death toll to rise.