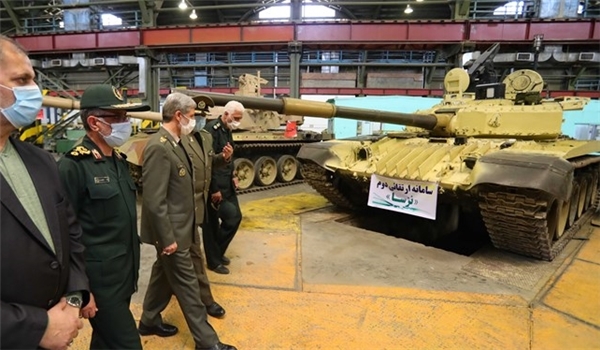 He added that the defense ministry relies on domestic capabilities to strengthen Iran's military power.

General Hatami also expressed the hope that the experts of the defense ministry will be able to upgrade all the operational tanks of the Armed Forces, saying that Iran is currently capable of manufacturing tanks equipped with the electro-optical fire control system, laser rangefinder system, ballistic computer, and a system to fire at fixed and moving targets at day and night.

He also referred to the achievements of the defense ministry in recent years, and noted that the equipment made by the Iranian experts must be upgraded in accordance with the needs of the Armed Forces in the battlefields.

The Iranian experts have been able to produce most of the needs of the country's Armed Forces.

“Today, we have been able to attain self-sufficiency in production of ultra-heavy tank transporters and stop dependence (on foreign states) with efforts of the faithful and specialized youth,” General Nemati said.

He added that the country’s experts could end the foreign states’ monopoly by manufacturing the ultra-heavy tank transporters, stressing that the Army’s Ground Force is now able to build any defensive tools it needs.

The tank transporter has been manufactured by the Army's Ground Force experts and enjoys 700/hp engine power and 200 tons of tensile strength.

It is also able to carry two 60-ton tanks on the ultra-heavy home-made 'Soleiman 3' towing vehicle.