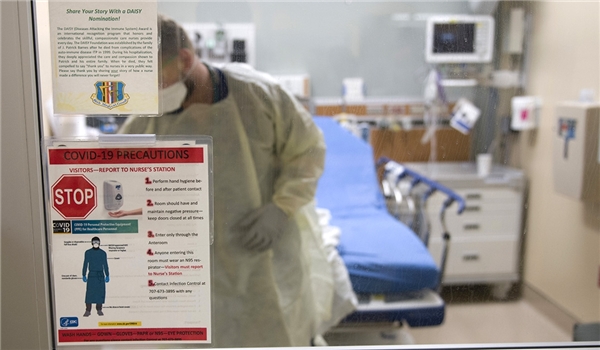 The first call in early April was from the testing center, informing the nurse she was positive for COVID-19 and should quarantine for two weeks.

The second call, less than 20 minutes later, was from her employer, as the hospital informed her she could return to her job within two days.

“I slept 20 hours a day,” said the nurse, who works at a hospital in New Jersey’s Hackensack Meridian health system and spoke on the condition of anonymity because she fears retaliation by her employer.

Though she didn’t have a fever, she was coughing and had other COVID-19 symptoms such as vomiting, diarrhea and nausea.

“You’re telling me, because I don’t have a fever, that you think it’s safe for me to go take care of patients?” the nurse stated, adding, “And they told me yes.”

Guidance from public health experts has evolved as they have learned more about the coronavirus, but one message has remained consistent: If you feel sick, stay home.

Yet hospitals, clinics and other healthcare facilities have flouted that guidance, pressuring workers who contract COVID-19 to return sooner than public health standards suggest is safe. Some employers have failed to provide adequate paid leave, if any, so employees felt they had to return to work – even while possibly infectious.

Many hospitals with an onslaught of patients have found themselves short-staffed. That need dovetailed with an entrenched culture in medicine of “presenteeism”. Frontline healthcare workers, in particular, follow a brutal ethos of being tough enough to work even when ill, reasoning that other “people are sicker”, noted Andra Blomkalns, the chair of Stanford University’s emergency medicine department.

In a survey of nearly 1,200 members, the Health Professionals and Allied Employees Union found roughly a third of those who stated they had gotten sick reported returning to work with symptoms.

Hospital employees are not only forced to choose between their paychecks and their health, they also go back to work knowing they may infect patients or colleagues. An investigation by KHN and The Guardian has identified at least 922 frontline health workers who have died of COVID-19, likely exposed to the virus at work.

The dilemma strains health workers’ sense of professional responsibility, knowing they may become vectors spreading infectious diseases to the patients they are meant to heal.

A database of COVID-related complaints made to the Occupational Safety and Health Administration this spring hints at the scope of the problem. It includes a respiratory clinic in North Carolina where COVID-positive employees were told they would be fired if they stayed home and a veterans hospital in Massachusetts where employees were returning to work sick because they weren’t paid otherwise.

“What we learned in this pandemic was employees felt disposable,” said Debbie White, a registered nurse and the president of the Health Professionals and Allied Employees Union, adding, “Employers didn’t protect them, and they felt like a commodity.”

The nurse from Hackensack Meridian, the largest hospital chain in New Jersey, told the hospital that a doctor had instructed her to stay home. Her supervisors did not threaten to fire her, she stated.

But in daily calls from work, she was reminded her colleagues were short-staffed and “suffering”.

She also discovered her employer had conducted what it called a “payroll adjustment” in March, taking leave from many of its employees without explaining its calculations. (A hospital spokesperson said the adjustment corrected a technical problem, adding that workers were informed of the changes and denying anyone was “shorted any PTO that they rightfully earned”.)

The health system followed CDC recommendations in clearing workers who contract COVID-19 to return to work, it announced.

“As a last resort,” the website adds, COVID-positive workers may provide care to patients who do not have the virus.

Meanwhile immunocompromised workers at high risk from the virus have faced difficult choices, noted Liz Stokes, the director of the American Nurses Association’s Center for Ethics and Human Rights.

She recounted the experience of a surgical nurse with Crohn’s disease who took leave at her doctor’s recommendation but was pressured by her bosses and co-workers to return.

Money pressures are also a factor. Shenetta White-Ballard carried an oxygen canister in a backpack at work. A nurse at Legacy Nursing and Rehabilitation of Port Allen in Louisiana, she needed the help to breathe after a serious respiratory infection.

When COVID-19 appeared, she showed up for work. Her husband, Eddie Ballard, said his paycheck from Walmart was not enough to support their family.

“She kept bringing up, she gotta pay the bills,” he stated.

Legacy Nursing and Rehabilitation did not respond to requests for comment.

Residents, or doctors in training, are among the most vulnerable, working on inflexible, tightly packed schedules often caring for dozens of patients each day.

Not long after New York-Presbyterian hospital admitted one of the city’s first confirmed COVID-19 patients, Lauren Schleimer, a first-year surgical resident, reported a sore throat and a cough. Because she had not been exposed to that patient, she was told she could keep working and to wear a mask if she was coughing.

Her symptoms subsided. But weeks later, her symptoms returned, worse than before. The hospital instructed her to stay home for seven days. She was never tested.

A hospital spokesperson noted it was heeding state and federal guidance to protect frontline workers.

Schleimer returned to work symptom-free at the end of her quarantine, caring for patients fighting the same virus she suspects she had. While she never felt that sick, she worried she could infect someone else.

“This was not the kind of thing I would stay home for,” Schleimer said, adding, “But I definitely had some symptoms, and I was just trying to do the right thing.”