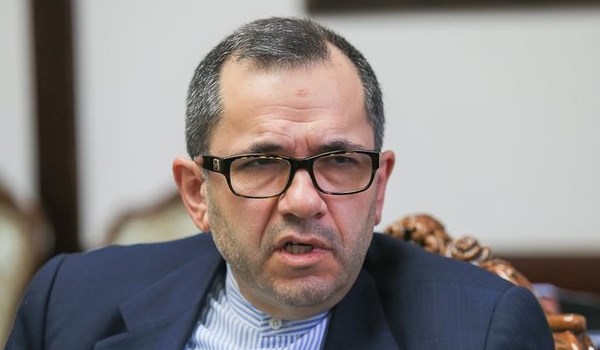 "Rebuffed by UNSC members, US was forced to retreat from its draft resolution on Iran arms embargo and proposed another version - also violating 2231 - today," the envoy added, and stressed that the new draft is similar to the old one in both nature and objective.

The United States recently submitted a 13-page draft to the UN Security Council against Iran with the aim of extending the arms embargo on Iran. The sanctions are about to be lifted on October 18, 2020.

The draft calls for an extension of Iran's arms, which is to be lifted under the JCPOA agreement.

As the United States faced opposition from the UNSC member-states to approve its draft proposal, it was forced to amend it to four pages instead of 13.

The members of the Security Council have the time to comment on this until Wednesday, after which the voting process will likely take place on Thursday or Friday.

Russia and China have repeatedly stated they will oppose the US resolution.

Foreign Minister Mohammad Javad Zarif expressed confidence that the revised draft resolution that would extend a UN arms embargo on Iran will end up in yet another failure for Washington at the UN Security Council.

Speaking to reporters after a cabinet meeting, Zarif said the US has sought to deceive the UN Security Council members by shortening a 5-page resolution into a 5-line resolution in a bid to hide its core content. “They (the Americans) think that the UNSC members lack common sense.

He described the resolution as illegal, and said, “They (the US) want to make use of the UNSC mechanism to annihilate the Council and I am certain that this resolution will not be approved either. Even the yes votes to it will be very low and most likely we will not face a new resolution.”

Council diplomats said the revised US draft resolution could be put in a final form Thursday and put to a vote Friday.

Diplomats, speaking on condition of anonymity because the new resolution had not been made public, said the revised text is just four paragraphs — compared to the original seven-page, 35-paragraph draft circulated in June.

Asked about claims that a part of US sanctions could be removed in the next few days under a proposal offered by Germany and Britain for renewed talks between Iran and the US, Zarif said, “If they have given such a plan to the US, (why) they did not give it to us too. We do not accept any plan which changes the nuclear deal.”

He also rejected the US officials’ remarks on triggering a snapback of all UN sanctions on Iran.

“When (John) Bolton announced proudly that they have withdrawn from the UN Security Council and can no more use the snapback mechanism, he thought that they would not need it as they would manage to bring the Iranian nation to its knees by maximum pressure,” Zarif responded.

He added that after over 3 years, the Americans have concluded that their policies have been wrong and they should return to their undertakings, compensate for the damages they have inflicted on Iran and stop their mischiefs in the region.

Zarif dismissed US President Donald Trump’s remarks that he can reach an agreement with Iran within 4 weeks, and said he has been wrongly advised on the issue; conditions of talks with Iran will not change with the US elections, rather they have always been related to Washington’s policies.

The US has circulated a resolution calling for an indefinite extension of the arms embargo, even though its legal argument to do so is very much under doubt at the moment. While other parties to the nuclear deal say that the US is no longer a participant to the deal and thus it has no authority to extend the embargo.

In order for the US resolution to be passed, at least nine members of the Security Council must vote in its favor. The US officials made efforts to win the support of countries, which currently hold a seat on the Security Council. Brian Hook, the former US special representative for Iran, paid visits to Tunisia, Estonia and the UK in a bid to get them to support the US push to extend the arms embargo.

However, even if the US gains enough votes to pass its resolution, it still could face the vetoes of Russia or China. The US officials have already implied that their resolution had a zero chance to be adopted.