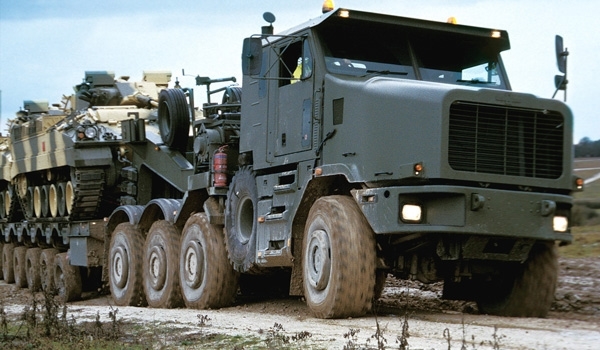 “Today, we have been able to attain self-sufficiency in production of ultra-heavy tank transporters and stop dependence (on foreign states) with efforts of the faithful and specialized youth,” General Nemati said on Tuesday.

He added that the country’s experts could end the foreign states’ monopoly by manufacturing the ultra-heavy tank transporters, stressing that the Army’s Ground Force is now able to build any defensive tools it needs.

The tank transporter has been manufactured by the Army's Ground Force experts and enjoys 700/hp engine power and 200 tons of tensile strength.

It is also able to carry two 60-ton tanks on the ultra-heavy home-made 'Soleiman 3' towing vehicle.

The two new army achievements were unveiled during Beit ul-Muqaddas 28 wargames in the Central province of Isfahan.

He said that Fallagh is equipped with automatic and stabilized Dushka weapon which is controlled by the crew inside.

TEHRAN (FNA)- The Iranian health ministry announced on Thursday that 8,293 new cases of coronavirus infection have been identified across the country during the past 24 hours, adding that 399 patients have passed away during the same period.

Poll: Half of Trump Supporters Say He Shouldn’t Accept Election Result If He Loses

TEHRAN (FNA)- Half of those who want President Donald Trump to win a second term believe that he should not accept the result of the presidential election if he loses by a small margin, a new poll found.

US Steps Up Deportation of Haitians Ahead of Election, Raising COVID Fears

TEHRAN (FNA)- US immigration authorities have radically stepped up deportation flights to Haiti in the weeks before the election, raising concerns over returned migrants’ safety on their return home and the risks of spreading coronavirus in the impoverished Caribbean state.

Poll: Two-Thirds of US Voters Say Democracy Needs to Be Fixed

TEHRAN (FNA)- More than two-thirds of US voters say that democracy in the country needs to be fixed, according to a new Hill-HarrisX poll conducted in the lead-up to the November election.

TEHRAN (FNA)- Demonstrators faced off against police in violent clashes across Washington, DC, on Wednesday night with video capturing looting, fireworks being thrown at officers, and a short-lived siege of a local precinct.

TEHRAN (FNA)- Chairman of the Bosnian House of Representatives Nebojsa Radmanovic stressed his country's willingness to further broaden relations and cooperation with Iran.

TEHRAN (FNA)- The COVID pandemic has reached a “critical” stage in England, with prevalence doubling since last month with the fastest increases in the South where the R number has risen above 2, research found.

TEHRAN (FNA)- Two people were killed as Hurricane Zeta made landfall as a category 2 storm late Wednesday in Southeast Louisiana.

US Reports Over 80,000 New COVID-19 Cases, Nearly 1,000 Fatalities as Trump Virus Chief Warns Country May Not Return to Normal Soon

TEHRAN (FNA)- More than 80,000 new cases of coronavirus infection have been identified across the United States during the past 24 hours, while almost 1,000 patients have passed away during the same period.
﻿
﻿
Sections