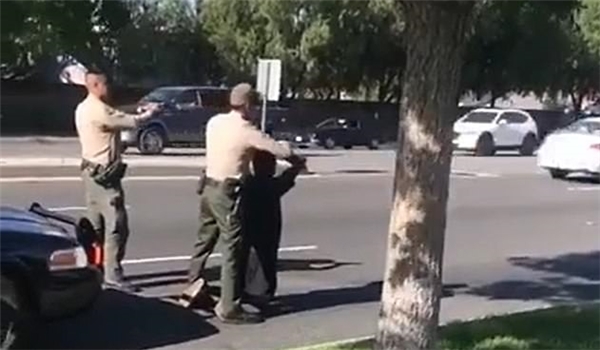 The incident unfolded on Friday afternoon in Santa Clarita, around 35 miles North of LA. One of the boy’s mothers, Tammi Collins, uploaded footage of the exchange to social media to decry the actions of the LA County Sheriff’s Office, Daily Mail reported.

In the clip, a number of deputies are seeing aiming high-powered weapons at the teen boys, who are all unarmed with their hands in the air, while bystanders tell them they are arresting the wrong people.

According TMZ, the officers lost sight of the homeless man and he was not detained or questioned.

According to Collins, her son and two friends had been sitting at a bus stop moments earlier when they were approached by the homeless man, who asked them "if they had any crack", before trying to steal some of their belongings.

As her son recounted to her, the concerned mother said the homeless man reportedly became increasingly hostile to the three boys, before ripping his shirt off, pulling out a knife and attempting to stab them.

Collins said that two of the boys were carrying skateboards with them at the time, and used the boards to block the man’s attacks.

A number of bystanders, including the manager of a nearby Buffalo Wild Wings chain, raced to call 911 to summon help for the boys.

However, according to Collins, one bystander who misunderstood the scene called police and told them that "two black guys are attacking a homeless guy", she said.

In a statement, Lt. Ethan Marquez with the Santa Clarita Valley Sheriff’s Station confirmed that police received "a call regarding an assault with a deadly weapon", - specifically that two males were striking another man with a skateboard.

A number of officers attended the call, training their guns on the boys who were still stood at the bus stop.

'This is how the police responded," Collins wrote, adding, "This is something my son and his friends will never forget. I’m still wonder[ing] how will I ever help my son recover from this traumatic experience."

In the 11 minute video posted by Collins, dozens of bystanders are heard pleading with the cops that the three boys are innocent and they’re attempting to detain "the wrong people".

"Look at this. This is crazy. It was the other guy," one shocked bystander calls out, adding, "It’s not them."

One of the officers shoos the woman away, shouting at her to "get back" with a swatting hand while the other remains aiming his assault rifle at the boys.

The manager of the Buffalo Wild Wings who made the initial 911 call is also heard trying to explain to officers that they were aiming their guns at the wrong people.

"I’m the manager here at Buffalo Wild Wings; we saw everything," she tells the officer, adding, "We’re the ones that called you."

Two minutes into the clip, one of the three teens is seen getting down onto his knees in the middle of the road and is handcuffed by an officer.

"They don’t care because he’s black," a witness says of the officers as the teen is led away into the back of a police vehicle.

"This is bull****. These kids didn’t do nothing at all," another witness adds, before urging police to lower their weapons because the boys are not resisting arrest.

"Just keep your hands up. It’ll be over soon," one woman from the gathering crowd attempts to reassure the boys.

As a second teenager is cuffed, one witness calls the unfolding scene "sad" because the officers are "supposed to be protecting us".

Once the two teens are in custody, an officer is heard explaining to the bystanders that everyone involved in the 911 call will be detained and that the skateboard was considered to be a weapon.

After speaking to the teens and a number of bystanders, officer released the boys without charge after determining they hadn’t committed a crime.

In a statement about the incident, the Santa Clarita Valley Sheriff’s Station claimed an "uncooperative" crowd of bystanders had gathered outside the nearby Buffalo Wild Wings, prompting them to call for back-up.

The sheriff’s office has not yet responded to a DailyMail.com request for comment.