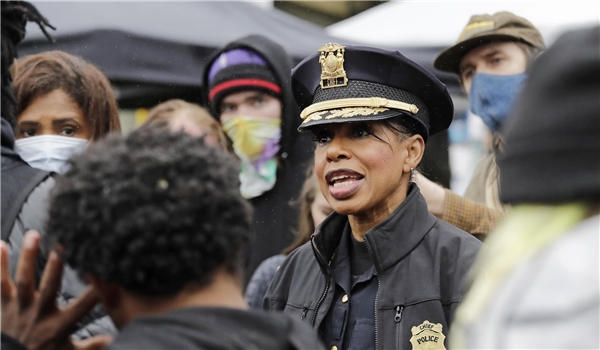 The action called for by BLM protesters has been strongly opposed by Mayor Jenny Durkan and Police Chief Carmen Best, who quit in protest, according to Daily Mail.

In a statement shared on social media late Monday night, Best, who is the city's first black female police chief, wrote that she will officially step down from her post on September 2.

"This was a difficult decision for me but when it's time, it's time," Best wrote, adding that she is "confident the department will make it through these difficult times".

"You truly are the best police department in the country, and please trust me when I say, the vast majority of people in Seattle support you and appreciate you," Best, who served within the department for more than 28 years, said.

"I am impressed daily at your skill, your compassion and your dedication. I look forward to seeing how this department moves forward through the process of re-envisioning public safety. I relish the work that will be done by all of you," she added.

Earlier on Monday, only one council member, Kshama Sawant, voted against the budget package, saying it does not do enough to defund the police.

Seattle currently has about 1,400 police officers and the reductions fell short of the 50 percent cut to the department that protesters demanded.

Measures that would cut less than $4million of the department's $400million annual budget this year passed out of committee unanimously last week.

The City Council also had cut Best's roughly $285,000 annual salary and the pay of other top police leaders, although the final cuts to Best's salary were significantly more modest than those approved last week.

The council plan also takes officers off a team that removes homeless camps.

Jason Johnson, the interim director of Seattle's Human Services Department, said in a letter last week that the move to defund the city's Navigation Team and redirect money to homeless outreach services will "dramatically restrict the city’s ability to address unauthorized encampments".

"While we can't do everything in this summer rebalancing package, we have set the path forward for tremendous work in front of us as a council and as a city," Councilwoman Teresa Mosqueda said.

Durkan and Best had urged the council to slow down its discussions about police budgets, saying the issue could be taken up in earnest when the 2021 city budget is considered.

They also said any layoffs would disproportionately target newer officers, often hired from Black and brown communities, and would inevitably lead to lawsuits.

Durkan has already targeted about $20million in savings from the police budget this year, largely because of reduced revenues amid the COVID-19 pandemic.

Last month, the mayor sketched out a plan to reduce the police budget by about $75million next year by transferring parking enforcement officers, the 911 call center and other areas out of the department.

As US attorney in Seattle, Durkan previously pushed a Justice Department investigation that found officers too quick to use force, leading to a 2012 consent decree with the federal government.

Reviews by an independent monitor have determined that the changes under the consent decree have led to a drop in how often police use force.

But critics have said the department's actions during recent protests show not enough progress has been made.

The decision came just a day after thousands of pro-police supporters donned blue and American patriotic colors as they wrapped around city hall for a "Back the Blue" rally.

The pro-police group was gathered outside Seattle City Hall ahead of Monday's City Council vote.

They broke glass doors at a Chase Bank and at a Key Bank as well as a Starbucks and other establishments.