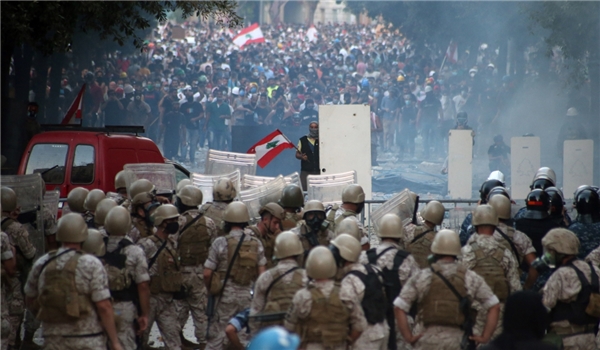 The Lebanese capital entered the second day of unrest as hundreds of people in Beirut stormed the buildings of the Labour Ministry and the Ministry for Refugee Affairs, the Lebanese National News Agency reported.

After attempting to storm parliament on Saturday night, angry mobs returned to the streets on Sunday, firing projectiles at security officers deployed to protect the government building in capital.

A fire broke out at the barricaded entrance to Parliament Square, prompting police to deploy clouds of tear gas and send firefighters in to extinguish the blaze.

In other part of the capital, another group of rioters hurled rocks at security forces blocking a road near Lebanon's parliament.

Footage from the scene the riots showed small groups of people had gathered to demonstrate against the government.

The violent protests came as a large part of the city lies in ruins, with many victims still feared trapped under the rubble after the last week explosion. the Beirut tragedy came to be a ploy for the anti-government camp to reinvigorate the protests over the economic conditions in Lebanon that faded away from the streets after the coronavirus outbreak.

Earlier, Lebanese Prime Minister Hassan Diab had called for early elections, stating that it is the only way out of the deep political crisis.

On Saturday, more than 700 people were wounded in clashes with riot police. Authorities announced that 70 security officers were injured and at least one of them died in clashes.

Following the tragic blast at Beirut port last week, terrifying footage showed a huge mushroom cloud of fire and smoke covering much of Beirut’s port area, blowing out windows and destroying buildings in the neighborhood, as a warehouse at the Beirut docks caught fire on Tuesday afternoon. Photos on social media showed many buildings in the area damaged or destroyed, leaving residents covered in glass and blood.

The explosions that killed 160 people in Lebanon's capital Beirut left a 43-meter deep crater at the site, according to local reports. The blast at Beirut's port also injured more than 6,000 people and devastated nearly half the buildings in the city. Red Cross volunteers at the scene of the explosion declared they expect the death toll to rise.

Beirut Governor Marwan Abboud has stated several foreign workers and truck drivers remain missing following the explosion and are assumed to be dead.

In an interview with Al-Jadeed TV station, Abboud noted that many of the fatalities are still unidentified, and that it could take time to complete the identification of the remains.