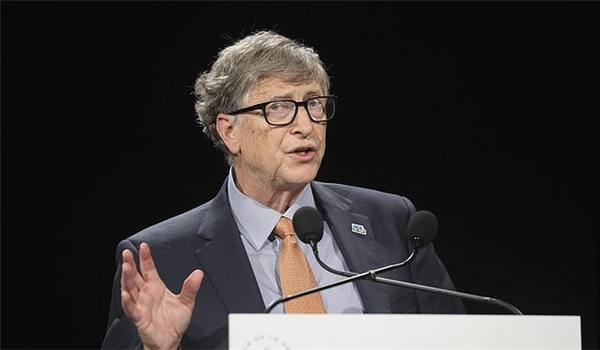 In a lengthy interview published by Wired on Friday, billionaire Gates said that he would have expected the CDC to be at the forefront of the nation's response as they include some of the "smartest people" but that they were pushed aside, Daily Mail reported.

The 64-year-old voiced his "surprise" at being repeatedly told he would have to contact the White House when he and his foundation approached the CDC about working to battle the outbreak.

"I'm surprised at the US situation because the smartest people on epidemiology in the world, by a lot, are at the CDC. I would have expected them to do better," Gates said of the country's response, claiming that the agency had been pushed aside since March.

"You would expect the CDC to be the most visible, not the White House or even Anthony Fauci. But they haven't been the face of the epidemic. They are trained to communicate and not try to panic people but get people to take things seriously," he said.

"They have basically been muzzled since the beginning," he added.

"We called the CDC, but they told us we had to talk to the White House a bunch of times. Now they say, 'Look, we're doing a great job on testing, we don't want to talk to you." Even the simplest things, which would greatly improve this system, they feel would be admitting there is some imperfection and so they are not interested," Gates added.

Gates continued to say that "the White House didn't allow the CDC to do its job after March" and that the work of the agency since that point has not been able to benefit the American people as a result.

"There was a window where they were engaged, but then the White House didn't let them do that," he said of the conflict between the CDC and White House.

"So the variance between the US and other countries isn't that first period, it's the subsequent period where the messages—the opening up, the leadership on masks, those things—are not the CDC's fault," he said.

"They said not to open back up; they said that leadership has to be a model of face mask usage. I think they have done a good job since April, but we haven't had the benefit of it," Gates said.

The philanthropist has been a vocal critic of the country's response to the pandemic for months and has spoken out previously about the need for collaboration with other countries, for improved testing, and how his foundation it supporting the push for a vaccine.

In April, the Bill and Melinda Gates Foundation, which he runs with his wife, said it was dedicating its "total attention" to fighting coronavirus.

The foundation has previously worked on the response to other pandemics such as the Ebola crisis. Gates himself has also previously warned that the US should be preparing for a pandemic such as the one we are currently experiencing.

"If we had built up the diagnostic, therapeutic and vaccine platforms, and if we'd done the simulations to understand what the key steps were, we'd be dramatically better off," Gates said of his unheeded warning.

"Then there's the time period of the first few months of the pandemic when the US actually made it harder for the commercial testing companies to get their tests approved, the CDC had this very low volume test that didn't work at first, and they weren't letting people test," he said.

"The travel ban came too late, and it was too narrow to do anything. Then, after the first few months, eventually we figured out about masks, and that leadership is important," he said.

In the Wired interview, he also had harsh criticism for the nation's testing as he claimed that many of the tests administered are wasted as they come back too late and leave the opportunity for people to have been infected with coronavirus in the time they were waiting for results.

"The majority of all US tests are completely garbage, wasted," Gates said.

Gates suggested that the companies creating the tests should be reimbursed based on how long it takes for results to be returned.

"If you don't care how late the date is and you reimburse at the same level, of course they're going to take every customer," he said of the companies, adding, "Because they are making ridiculous money, and it's mostly rich people that are getting access to that."

"You have to have the reimbursement system pay a little bit extra for 24 hours, pay the normal fee for 48 hours, and pay nothing (if it isn't done by then). And they will fix it overnight," he said.

He went on to say that it couldn't change because the federal government sets the reimbursement system and, so far, calls to change it had been ignored.

"When we tell them to change it they say, 'As far as we can tell, we're just doing a great job, it's amazing!' Here we are, this is August," he said.

"We are the only country in the world where we waste the most money on tests. Fix the reimbursement," Gates said.

The US is currently carrying out, on average, about 739,000 tests each day, according to data compiled by the COVID Tracking Project.

There have been more than 4.9 million positive tests recorded across the country and more than 162,000 Americans have died from COVID-19.

President Donald Trump has repeatedly boasted of the country's success when it comes to testing.

In an interview with Axios that aired on Monday, Trump said the US should get credit for increased testing.

Despite his criticism on testing and the White House, Gates remains hopeful for a speedy pathway toward a vaccine, however, after his foundation pledged $1.6billion in June to the Global Alliance for Vaccines and Immunization.

They said that $100million of the donation would be specifically funding coronavirus vaccines.

"In China and Russia, they are moving full speed ahead," Gates said of the work being done to find a vaccine around the world.

"I bet there’ll be some vaccines that will get out to lots of patients without the full regulatory review somewhere in the world. ... The [Food and Drug Administration], to their credit, at least so far, is sticking to requiring proof of efficacy," he continued.

"So far they have behaved very professionally despite the political pressure. There may be pressure, but people are saying no, make sure that that’s not allowed. The irony is that [Donald Trump] is a president who is a vaccine skeptic," he added.

The billionaire blamed much of the push back on vaccines on the "poisoned chalice" that is social media, labeling anti-vaccine conspiracies as "anti-science".

"The irony is that it’s digital social media that allows this kind of titillating, over-simplistic explanation of, 'OK, there’s just an evil person, and that explains all of this,'" he said.

Gates' comments came as deaths in the US exceeded the grim 161,000 mark on Saturday, which is nearly a quarter of the global COVID-19 death toll. The number of positive cases across the US is now closing in on five million.

Public health experts have in recent days sent regular warnings to cities and states not to relax anti-coronavirus measures too much before the virus is under sufficient control.

President Trump, in contrast, has played down the staying power of the virus, saying on Wednesday "it will go away like things go away" as he urged US schools to reopen on time for face-to-face lessons.