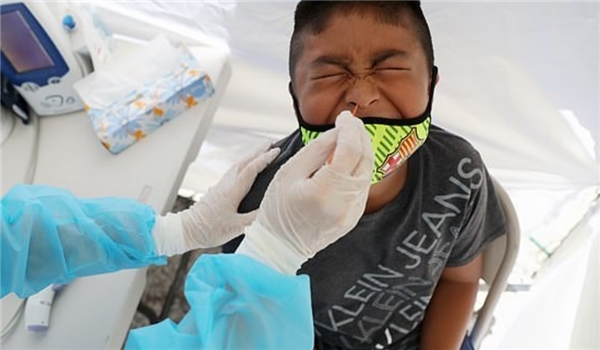 The news comes as school districts around the country are preparing to reopen for the new school year or have already started in-person classes.

The American Academy of Pediatrics released the report stating that the positive test results came in between July 16 to July 30, according to CBS News This Morning.

The group also said that out of the nearly five million reported coronavirus cases in the US to date, more than 338,000 people who tested positive were children.

In July, more than 25 children were reported to have died from coronavirus.

Vanderbilt University's Dr. Tina Hartert told CBS News that she hopes testing more children for the virus will provide information that can help show what role children have in transmitting the virus.

Hartert is leading a government-funded study that involves sending 2,000 families DIY coronavirus testing kits, which allows parents to collect samples and then send them back to "a central repository", she added.

School officials in more than 13,000 school districts have been tasked with getting children back to in-person classes for the new school year, after schools shut down in March during the first wave of coronavirus.

The country's largest school district is in New York City.

NYC Mayor Bill de Blasio promised that school officials "have worked incessantly to get this right" and noted that schools in the city would reopen for in-person lessons.

"They've looked at examples from all over the world of what will keep the school community safe, and they've made a series of choices of how to do things from the health and safety lens first, while also making sure we can educate our kids," he stated in a Friday press conference.

Parents now have a choice to register their kids for in-person instruction, remote learning or a hybrid of the two options.

School officials in other states have been detailing plans for keeping students safe in school.

During a press conference, while behind a Plexiglas barrier, he announced, "As I'm sitting here and I can articulate. The student on the other side will be wearing a mask. Then I can put my mask on, and that student can drop their mask and articulate as well."

The district does not anticipate many students will be riding the buses though, as 35 percent of children in the area are expected to take remote classes.