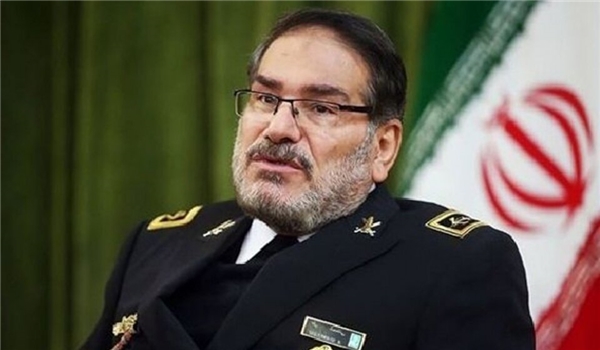 "Preventing Iran's strategic cooperation with the East and continued dependence of its national economy on oil [revenues] set the West's core policy towards Iran," Shamkhani wrote on his twitter page.

He underlined his country's decision to pursue both policies of close ties with the Eastern block and independence from oil revenues, and vowed that his nation "will go past the existing challenges with active resistance and national solidarity".

His comments came as Iran is pursuing long-term cooperation with Russia and China.

In a meeting with his Russian counterpart Sergei Lavrov in Moscow in July, Iranian Foreign Minister Mohammad Javad Zarif said Iran-Russia relations are at their strongest in decades, adding that such sustainable ties will benefit both countries and guarantee global peace and security.

“Today, relations between Iran and Russia are at their highest peak in comparison to the previous decades and we hope that we will be able to maintain these relations all the more powerfully and in a longer-lasting fashion,” Zarif said.

He also said earlier that the extension of a 20-year cooperation agreement with Russia, which will expire in March 2021, is on the agenda of talks between the two countries.

Iran and China also seek to finalize a long-term agreement, which was announced in a joint statement during a visit to Tehran by Chinese President Xi Jinping in 2016.

The cooperation roadmap consists of 20 articles, covering Tehran-Beijing ties in “Political,” “Executive Cooperation,” “Human and Cultural,” “Judiciary, Security and Defense,” and “Regional and International” domains, according to the statement released back then.