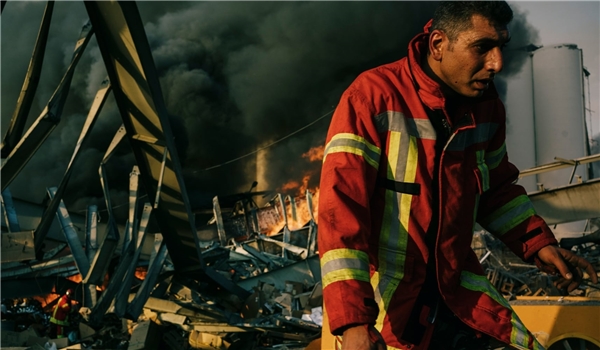 TEHRAN (FNA)- At least 158 people were killed in the blast that rocked Lebanon's capital and more than 6,000 others injured, but numbers are expected to rise as search and rescue operations continue for missing people in Beirut.

The number of people injured exceeds 6,000 and 21 are still reported missing, it added.

The explosion left 300,000 homeless, as vast part of the city has been fallen into ruin. Red Cross volunteers at the scene of the explosion declared they expect the death toll to rise.

Lebanese rescue workers and army soldiers are struggling to remove huge items of debris in search for possible survivors at Beirut's port. The Lebanese Red Cross believes there are still tens of people missing, most of who were working at Beirut's port.

After the explosion rocked the capital city of Beirut on Tuesday, the Lebanese government decided to put all officials who oversaw storage and security there since 2014 under house arrest, until investigations are complete.

On Friday, Lebanon’s President Michel Aoun stated an investigation into the Beirut port explosion was looking at whether it was the result of external interference, in addition to simple negligence or an accident.

Aoun also noted no colonial power can return to Lebanon, following a trip by French President Emmanuel Macron to disaster-stricken Beirut that sparked outrage among the Lebanese.

The president also rejected calls for an international probe into the incident.

Speaking in a televised speech on Friday, Secretary General of Hezbollah Seyed Hassan Nasrallah strongly denied claims that the resistance movement had any weapons stored at the warehouse prior to the explosion, adding that those accusations aimed to incite the Lebanese people against the resistance group.

He stressed that that the investigation will soon "reveal the truth" behind the deadly blast.

Nasrallah said those responsible for the deadly disaster had to be held to account regardless of their affiliations, stressing that the probe should have neither political nor sectarian motives.

The health minister blamed the explosion on a fireworks accident, ordering all hospitals in Beirut to prepare for the victims of the incident.

The Health Ministry announced all Beirut hospitals are overcrowded with those injured in the incident and can no more accommodate anyone.

Yet, the Health Minister told Lebanon's LBC News that hundreds are feared dead and thousands have been wounded in the blast. He added that the death toll now stands at over 158.

The Lebanese Red Cross also declared that over 6,000 people have been wounded in the incident, while the numbers are still expected to rise. It added that over 158 dead bodies have been collected from the scene of the incident so far.

Beirut Governor Marwan Abboud called it a "national catastrophe" and the prime minister declared a day of mourning.