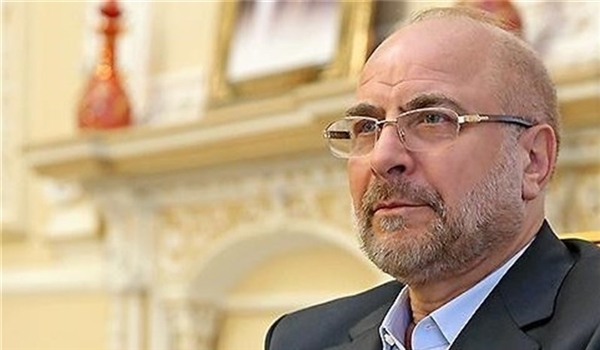 In separate messages to political and religious figures of the Shiite world on Saturday, Qalibaf congratulated the arrival of Eid al-Ghadir.

"In the current critical situation of the Islamic world and in the shadow of adhering to the Holy Quran and the Ahl al-Bayt (PBUH), it is necessary to take and realize our strong and unifying steps with unity and practice of the teachings of pure Islam," the Iranian parliament speaker said.

Saturday marks Eid al-Ghadir, which is the day when the Prophet of Islam appointed Ali ibn Abi Talib (PBUM) -- the first Shiite Imam - as his successor and Muslims’ next leader.

Prophet Mohammad announced his appointment on the way back from his last Hajj pilgrimage fourteen centuries ago.

Shia Muslims celebrate this auspicious occasion around the world.

Eid al-Ghadir comes eight days after another great festivity, called Eid al-Adha or the Feast of Sacrifice – an important festival on the Islamic calendar that marks the climax of the annual hajj pilgrimage in Mecca and Medina.

TEHRAN (FNA)- Physical distancing, hand hygiene and respiratory hygiene are the most important and effective things we can all do to prevent the spread of coronavirus. The wearing of face coverings must not be used as an alternative to any of these other precautions. [PHOTOS]
﻿
﻿
Sections