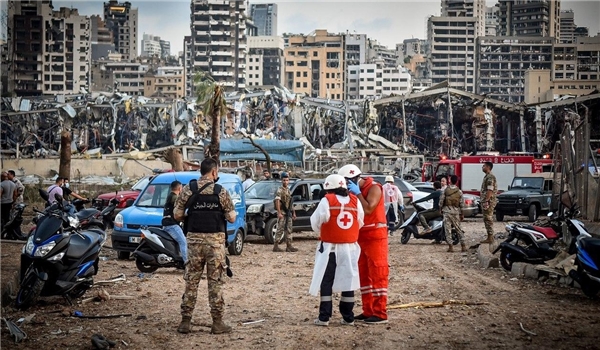 Members of the Lebanese Red Cross, army soldiers and volunteers were still searching for people listed missing under the rubble in areas near the port.

Civil defence workers were also busy examining building structures amid concerns that some might collapse after they were affected by the huge blast.

Lebanon's Ministry of Health announced that 157 people have been killed in the blast at Beirut's port on Tuesday, while at least 5,000 others have been injured. The explosion left 300,000 homeless.

Red Cross volunteers at the scene of the explosion declared they expect the death toll to rise as searches continue at the port where dozens are still missing, especially among employees who were present at the time of the incident.

After the explosion rocked the capital city of Beirut, the Lebanese government has decided to put all officials who oversaw storage and security there since 2014 under house arrest, until investigations are complete. The investigation is being conducted by a special committee headed by the Justice Minister and includes Prime Minister Hassan Diab and the heads of major security agencies.

The government of Lebanon has given an "investigative committee" four days to determine responsibility for the devastating explosion in Beirut port on Tuesday, Foreign Minister Charbel Wehbe told French radio.

"This morning, a decision was taken to create an investigative committee which in four days maximum must provide a detailed report on responsibility - how, who, what, where? There will be judicial decisions," he told Europe 1 radio.

"It is serious, and we take it seriously," Wehbe said, adding, "Those responsible for this horrible crime of negligence will be punished by a committee of judges."

As vast part of the city has been fallen into ruin, Economy Minister Raoul Nehme warned that Lebanon does not have sufficient financial means to cope with the consequences of the explosion in Beirut, noting, "We are asking the international community for aid. The damage caused by the explosion is assessed as billions of dollars. We will need time to estimate the total damage."

Beirut Governor Marwan Abboud has also declared the massive explosion in Beirut might cost up to $15 billion worth in damage, pointing out that the capital "has some grain stocks, so the authorities are planning to cope with the food crisis without external interference".

The deadly blast in the port of Beirut, which the mayor of the city compared to Hiroshima and Nagasaki in 1945, had an explosive yield of several hundred tons of TNT equivalent, Business Insider reported, citing weapons experts.

Roland Alford, Managing Director of Alford Technologies, a British company that specialises in disposal of explosive ordnance, said “on a scale, this explosion is scaled down from a nuclear bomb rather than up from a conventional bomb”.

He added that “this is probably up there among the biggest non-nuclear explosions of all time".

Terrifying footage showed a huge mushroom cloud of fire and smoke covering much of Beirut’s port area, blowing out windows and destroying buildings in the neighborhood, as a warehouse at the Beirut docks caught fire on Tuesday afternoon. Photos on social media showed many buildings in the area damaged or destroyed, leaving residents covered in glass and blood.

The Health Ministry said all Beirut hospitals are overcrowded with those injured in the incident and can no more accomodate anyone.

Beirut Governor Marwan Abboud called it a "national catastrophe", adding, “It resembles to what happened in Japan, in Hiroshima and Nagasaki. That’s what [it] reminds me of. In my life, I haven’t seen destruction on this scale."