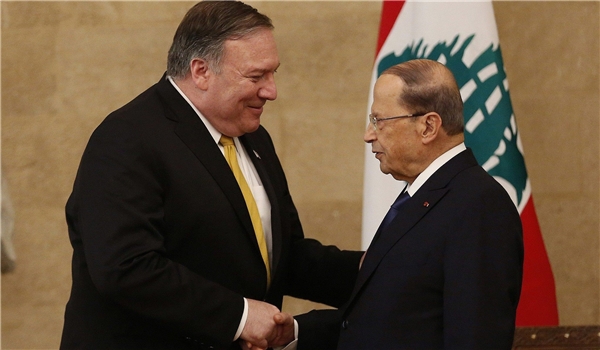 Iranian Foreign Ministry Spokesman Seyed Abbas Mousavi pointed to the US and Zionist regime’s sympathy with the Lebanese people, and said, “This is one of hypocrisies and deceptions of the Zionist regime and the United States that have always tried to fish in troubled water. If they are honest, they should lift sanctions imposed against Lebanese people.”

God willing, stability and peace will return to Lebanon with the help of Islamic governments, Muslim people and other countries in the world, he emphasized.

Hundreds of individuals and entities have been sanctioned by the US in Lebanon, with the list focusing mainly on those with ties to the Hezbollah resistance movement. The list, however, includes a wide range of targets, from pharmaceutical companies, religious organizations and community outreach groups to banks and trading importer/exporters.

Observers say that the US sanctions on Lebanon have deteriorated the already struggling economy of the Arab country.