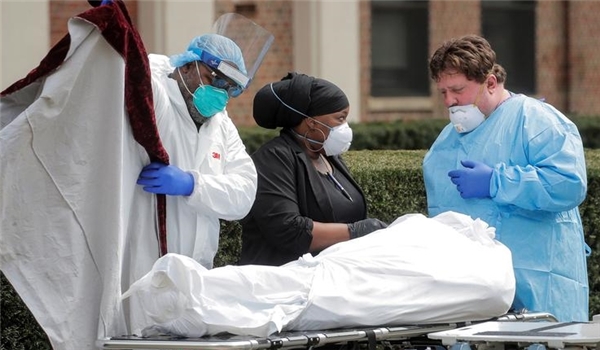 TEHRAN (FNA)- Over the last seven days, a grim new COVID-19 calculus has emerged, as one person died every 80 seconds from the coronavirus in America.

The pace at which those 7,486 people died appears to be accelerating, a new NBC News tally revealed Wednesday.

As of Wednesday morning, more than 158,200 people in the US had died of the virus since the start of the virus pandemic.

The numbing new national snapshot of how COVID-19 is claiming more and more lives came as Johns Hopkins University reported another milestone: The world death toll from this plague had eclipsed 700,000.

The US has logged over 4.82 million confirmed cases, while around 1.8 million of those have come since July 7, when the 3 millionth case was reported, NBC News figures showed.

While most of the new cases and deaths have been in the South and Sun Belt, states in the Northeast like New York, New Jersey and Massachusetts that were hit hardest at the start of the pandemic — and were able to flatten the curve — have also reported worrying upticks.

Under fire for being slow to respond to the COVID-19 crisis and presiding over the biggest economic disaster since the Great Depression, President Donald Trump once again downplayed the extent of the pandemic in a call-in interview Wednesday with "Fox & Friends".

“This thing is going away,” he said, adding, “It will go away like things go away.”

Joe Biden, the Democrat hoping to oust Trump from the White House come November, fired back, stressing, “Donald Trump continues to live in a world of delusion."