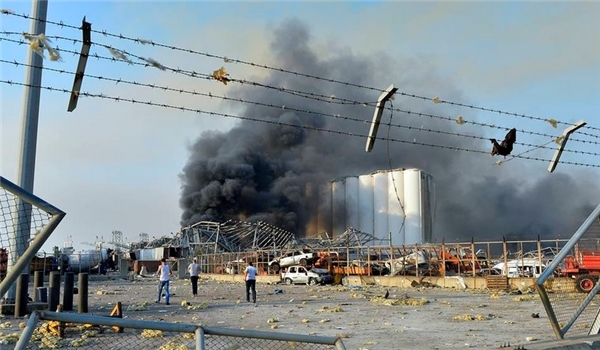 TEHRAN (FNA)- Lebanon’s government ruled on Wednesday that all senior officials of the Beirut port are to be placed under house arrest until each’s responsibility for the Tuesday deadly blast is established, the Lebanese television channel LBC International reported citing the cabinet’s emergency meeting.

"The cabinet decided to place all port officials under house arrest until the responsibility of those complicit in the explosion is determined," the cabinet announced in a resolution.

The officials are barred from leaving homes and are suspended "pending the conclusion of the investigation".

The army is assigned to oversee their house arrest.

According to the TV channel, those responsible for the blast have not been identified in Beirut yet, but the investigation looks into the current and former high-ranking officials working at the harbor who oversaw storage and security of hazardous chemicals in the port area.

Apart from that, the government approved all the recommendations passed by Lebanon’s Supreme Defense Council at its emergency session on Tuesday, including "to declare a two-week state of emergency in Beirut and to conduct an investigation into all the circumstances of the tragedy, which results are to be announced within minimum five days".

A powerful blast ripped through Beirut’s port located near the Lebanese naval base and generated a shockwave that either destroyed or damaged dozens of houses and cars and shattered glass in even distant districts of the city. According to local authorities, detonation of 2,750 tonnes of ammonium nitrate, which was seized by the customs back in 2014, caused the explosion.

On Wednesday, Badri Daher, the head of the Beirut port and the chief of the Lebanese Customs, stated that both his agency and the country’s General Security Directorate repeatedly called for the hazardous cargoes to be removed from the port, but their requests were ignored over the past six years.

According to latest updates, at least 113 people were killed and over 4,000 were injured. Dozens are still missing. Over 300,000 people were left homeless.