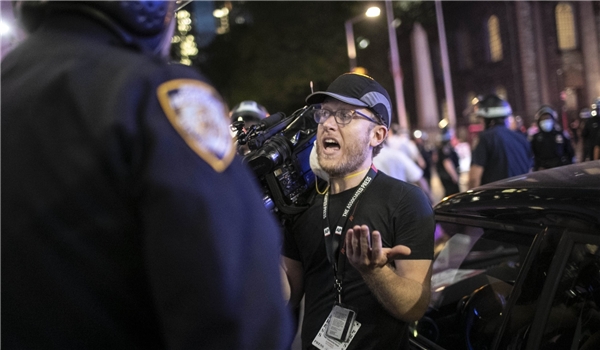 There have been more than 612 press freedom incidents so far this year, according to the group’s July tally. The figure includes more than 87 arrests, 140 physical attacks, 143 injuries from rubber bullets or projectiles, and 76 cases where equipment was damaged. There have also been dozens of cases of journalists being teargassed or hit with pepper spray, according to RT.

The press freedom watchdog said that the number of assaults against journalists so far in 2020 is “unlike anything we’ve seen in modern history”. The group has documented more incidents so far this year than in the previous three years combined.

The organization typically records around 100-150 press freedom violations in the US each year.

Journalists have repeatedly found themselves in the crossfire of nationwide Black Lives Matter protests sparked by the death of George Floyd at the hands of the Minneapolis Police. According to the US Press Freedom Tracker, the cases of aggression against reporters are spread out across 72 cities and 35 states.

Portland, Oregon currently has the highest reported numbers of assaults against the press, as well as the highest number of journalists hit with projectiles. Federal agents deployed to protect the city’s federal courthouse have been accused of using excessive force against protesters and media who have been covering the demonstrations. A judge recently placed a temporary restraining order on Department of Homeland Security (DHS) forces to prevent them from using crowd control measures against members of the press. The federal agents have since been put on ‘standby’, with state and local law enforcement tasked with ensuring public safety during the protests, which have lasted for more than two months.

Although the huge increase in assaults is concerning, some journalists have complained that protesters have been identifying themselves as press, even as they hurl projectiles at police. These alleged tactics have put actual journalists in danger, according to one reporter who has been on the ground in Portland. Blaze TV’s Elijah Schaffer claimed in a recent tweet that activists were using press immunity to “harass & in some cases assault officers”.

“This is a new tactic ahead of the election to create mayhem. And the lazy corporate media continues to push the narrative [that] press are being targeted by feds, police etc.,” he added.