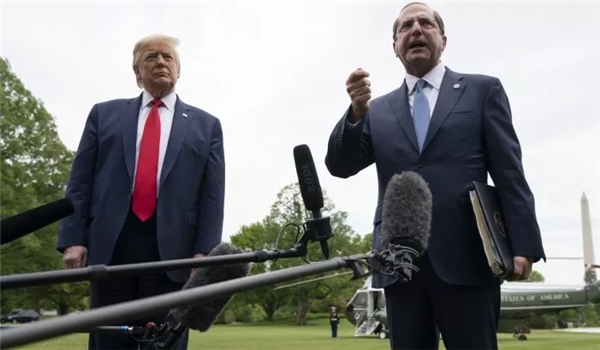 TEHRAN (FNA)- A senior US official is to lead a delegation to Taiwan in the highest-level visit since 1979 to discuss the coronavirus pandemic and to “celebrate the shared values” of the two democracies – prompting China to urge the US not to “send the wrong signals to Taiwan secessionists”.

The US Health Secretary, Alex Azar, said he would be the first cabinet member to visit in six years, in the most significant trip there since the US formally cut diplomatic ties decades ago to pursue relations with the Chinese Communist party, according to The Guardian.

Taiwan announced the visit would take place in the coming days.

“Taiwan has been a model of transparency and cooperation in global health during the COVID-19 pandemic and long before it,” said Azar, who is also the chair of the US coronavirus taskforce.

“I look forward to conveying President [Donald] Trump’s support for Taiwan’s global health leadership and underscoring our shared belief that free and democratic societies are the best model for protecting and promoting health,” he added.

The US delegation’s visit is already fuelling tensions with China, which claims Taiwan as its own and vows it will be brought under control by force if necessary. China’s Foreign Ministry announced on Wednesday it firmly opposed official interaction between the US and Taiwan, and it had lodged “stern representations” with the US.

State media reported that China had urged the US “not to send the wrong signals to Taiwan secessionists”.

In May, Beijing expressed “strong indignation” after the US Secretary of State, Mike Pompeo, hailed the “courage and vision” of Tsai upon her re-election. Last year a US visit by Tsai drew “stern representations” from Beijing, which urged Washington not to allow the visit if it wanted “to avoid harming Sino-US relations and peace and stability in the Taiwan Strait”.

Shortly after the Chinese Foreign Ministry press conference on Wednesday, Tsai tweeted that she was looking forward to welcoming Azar.

“Your timely visit is another testament to the strong Taiwan-US partnership based on our longstanding friendship & shared values,” she wrote.

While ostensibly focused on the pandemic, the visit comes at the lowest point in US-Sino relations in four decades, with hostilities on multiple fronts including trade, technology, human rights and Hong Kong.

Joining Azar will be the chief medical officer of the Centers for Disease Control, Dr. Mitch Wolfe, and the retired US ambassador James Moriarty, who now chairs the American Institute in Taiwan. They will “discuss the COVID-19 response, global health, the US-Taiwan partnership, and Taiwan’s role as a reliable global supplier of medical equipment and critical technology”, according to a statement.

The US Department of Health and Human Services announced, “In contrast to authoritarian systems, US and Taiwan societies and economies are uniquely equipped to drive global progress in areas such as medicine and science to help the world tackle emerging threats.”

Taiwan’s virus response is considered to be one of the most successful in the world, while the US continues to report tens of thousands of new cases a day. The US has provided assistance to Taiwan in the form of arms sales, and has an increasing presence in the South China Sea.

On Tuesday, China’s Ambassador to the US, Cui Tiankai, said the US’s intensifying military activities in the region were raising the risk of a potential confrontation, and denied allegations Beijing was practising intimidation in the South China Sea.

Cui stated that Beijing did not want tensions to escalate further, after retaliatory consulate closures in Houston and Chengdu, and sanctions against government officials.

“I don’t think a new cold war would serve anybody’s interest,” he noted, adding, “Why should we allow history to repeat … when we are faced with so many new challenges?”

“Taiwan and the US are like-minded partners cooperating closely in combating the coronavirus and promoting freedom, democracy and human rights worldwide,” it added.

The last US cabinet official to visit Taiwan was Gina McCarthy, the Environmental Protection Agency administrator, in 2014.