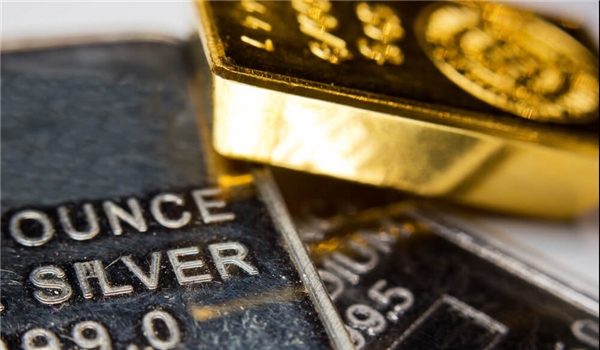 TEHRAN (FNA)- Silver is set to outshine gold, even as prices of both precious metals soar in the midst of a faltering global economy and a weakening US dollar.

This year, gold prices have shot to record highs not seen since September 2011. Investors have been fleeing to “safe haven” assets as the pandemic shows no signs of abating, CNBC reported.

Gold prices hit a new record close of $2,021 per ounce overnight — settling above $2,000 for the first time. It was last trading at $2,020.30. Geopolitical unrest overnight likely added to the spike. The blasts in Beirut, which killed dozens and wounded thousands, “probably (added) to the shine of Gold above $2020”, said a note from Mizuho Bank.

Spot gold prices have spiked more than 32% so far this year and are on track for the best year since 1979. Meanwhile, silver prices have also followed suit, shooting up more than 30% year to date.

Analysts pointed out that the the world economy is set to bounce back, and that will drive up industrial consumption. That’s set to increase the demand for silver, which has many industrial uses.

“Silver … has a much higher industrial component to it. So, much higher component of silver supply demand in industrial consumption. And in an environment where we see the global economy recovering, that’s another reason to buy silver,” Hsueh told CNBC on Tuesday.

Analysts at Citi also stated in a note last month that the rebound in manufacturing activity is pushing silver prices higher compared to gold.

The US elections could also come into play, Citi added.

Analysts at the bank said markets are pricing in the potential for more demand for silver, if Joe Biden wins the US presidential elections and delivers his green infrastructure plan.

Under Biden’s plan, commuter trains, buses and passenger vehicles will run on electricity or clean fuel, and clean light rail and bus systems will be developed. In addition, the plan includes offering incentives to upgrade housing and commercial buildings to make them more resistant to extreme weather.

He pointed to the use of silver in an increasing number of medical applications, as well as in electronic components for 5G telecommunications networks.

But generally, both precious metals are set to continue rallying, according to analysts.

“There is plenty of upside for both gold and silver, in our view and ... for silver to continue to outshine even gold,” Naylor-Leyland wrote.

He pointed to factors “tipping investors over the edge in their distrust of fiat currencies — especially the US dollar”. That includes monetary easing and the spike in government spending on managing the coronavirus outbreak, he said in his note.

Gold prices and the greenback have an inverse relationship. As the US dollar has been falling against other currencies, the precious metal will become cheaper in other currencies, in turn spurring demand for gold and causing prices to go up.