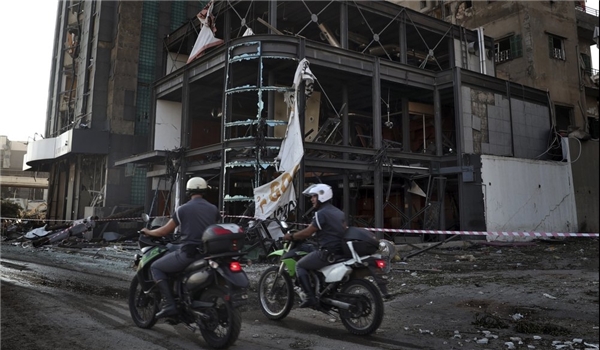 TEHRAN (FNA)- Several staffers of foreign missions in Beirut were injured in the Tuesday huge explosion which has killed at least 100 and wounded over 5,000 people.

Staff at the UK embassy in Beirut suffered injuries in the huge blast that rocked the Lebanese capital on Tuesday. A Foreign Office spokesperson said that a small number of staff sustained non-life threatening injuries in the explosion and are receiving medical attention where necessary.

Members of staff at Germany’s embassy in Beirut were also hurt in the explosion, the country’s foreign ministry confirmed. ‘We’re shocked by the photos from Beirut. Colleagues at our embassy are also among the wounded,’ the embassy said in a message on Twitter.

Five staffers of the Dutch Embassy in Lebanon were injured in the dramatic explosion in the port of Beirut, Dutch Foreign Minister Stef Blok said.

According to Dutch media reports, only one of all those wounded sustained serious injuries.

At least one Australian was killed and the Australian embassy in Beirut "considerably" damaged by a huge blast in Lebanon's capital.

Prime Minister Scott Morrison said Australia's embassy had been "impacted significantly" by the explosion that sent shockwaves across the city, shattering windows, blowing in doors, over-turning cars and smashing masonry.

Meantime, two Filipinos were killed in powerful explosions that hit the Port of Beirut in Lebanon, the Department of Foreign Affairs (DFA) confirmed Wednesday.

In an online briefing, DFA Undersecretary Sarah Arriola disclosed that the two additional Filipinos injured were seafarers aboard a ship that was docked 400 meters away from the explosion’s location.

The two seafarers are among the 13 who jumped from their ship after the explosion took place, Arriola said.

A Chinese national sustained a slight injury after a massive explosion rocked the Lebanese capital of Beirut, the Chinese Embassy in the country said on Wednesday.

An Indonesian citizen was also injured in the huge explosions in Lebanon's capital of Beirut, the Indonesian Foreign Affairs Ministry said in a statement on Wednesday.

According to the ministry, the Indonesian embassy in Beirut has managed to contact the victim who is now in a stable condition and able to communicate.

Meantime, the UN said Tuesday that "several" of its employees were injured when the massive explosion rocked Lebanon’s capital,.

Farhan Haq, Deputy Spokesman for Secretary General Antonio Guterres, did not specify the number of injured personnel or in what capacity they work for the UN. But the international body runs myriad programs in the Mediterranean country, including refugee aid and a peacekeeping force in the country's South.

A massive explosion rocked the Lebanese capital of Beirut on Tuesday, killing at least 100 people, wounding over 5,000 more, and smashing a vast area.