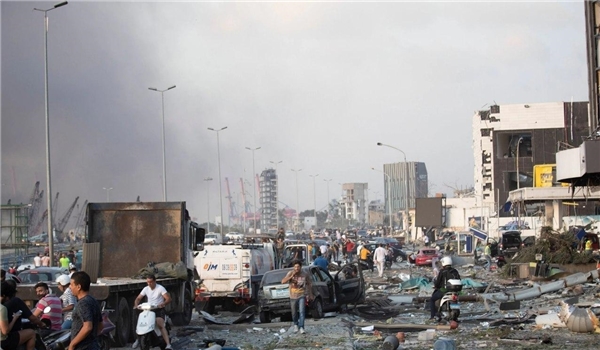 Zarif reiterated during his phone call on Wednesday with Wehbe that Iran is prepared to send humanitarian aids to help remove the sufferings of the Lebanese people.

Iran will stand by Lebanese people and government, he emphasized.

In an earlier message on Tuesday, Zarif had sympathized with Lebanese people over the deadly explosion which ripped through the capital Beirut, killing scores of people and injuring thousands of others.

"Our thoughts and prayers are with the great and resilient people of Lebanon," Zarif wrote on his Twitter account late on Tuesday.

"As always, Iran is fully prepared to render assistance in any way necessary," he added.

A massive explosion rocked the Lebanese capital of Beirut on Tuesday, killing over 100 people, wounding over 5,000 more, and smashing a vast area.

The health ministry said all Beirut hospitals are overcrowded with those injured in the incident and can no more accomodate anyone.

Yet, the health minister told Lebanon's LBC News that hundreds are feared dead and thousands have been wounded in the blast. He added that the death toll has exceeded 100.

The Lebanese Red Cross also declared that some 5,000 people have been wounded in the incident, while the numbers are still expected to rise. It added that some 100 dead bodies have been collected from the scene of the incident so far.