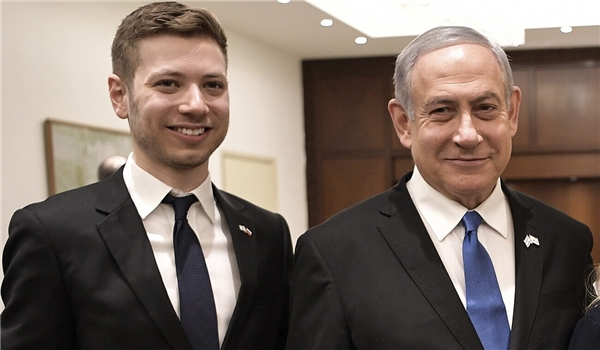 TEHRAN (FNA)- Thousands of Israelis who have been protesting against Prime Minister Benjamin Netanyahu are “aliens” who make the embattled prime minister laugh, his son, Yair Netanyahu, told a local radio station.

During his appearance on Galey Israel Radio on Monday, Netanyahu Jr was asked if he and his father had watched clips of the large-scale rallies demanding the PM's resignation.

“I let him see select parts,” Yair responded, adding, “I try and not show him the obscene things, because that would be unpleasant, but you know, he finds it entertaining, gives him a bit of strength even.”

The 29-year-old pointed out that Netanyahu was nothing like former Israeli Prime Minister Menachem Begin, who stepped down in 1983 as a result of mass protests. Begin was also the founder of the Likud Party, of which both Netanyahus are members.

The comment elicited an angry reaction from the organizers of the protests, who insist that Netanyahu must abandon the post of prime minister due to his rampant corruption and failures regarding Israel’s response to COVID-19.

For Netanyahu and his family, “We are not even human – aliens. This is not a prime minister, it’s a criminal suspect for whom the plight of his people is a source of amusement”, they wrote in a statement, adding that they’ll keep flooding the streets until they achieve their goal.

Apparently realizing that he had said a bit too much, Yair took to Twitter to attempt a bit of damage control. He explained that he didn’t mean to dehumanize anybody, but was only talking about those dressing up in costume as extraterrestrial beings for the rallies.

“When I said 'aliens'… I meant those who dress up as aliens and UFOs," he wrote, saying, "Those who come in either obscene costumes or holding up signs with obscenities, those who put a spaghetti pot on their heads or dress as Spider-Man.

“There are too many of these and it's funny,” he pointed out. However, he added that the incitement of violence and “calls for murder” made during the protests were no laughing matter.

It’s not first time that Netanyahu made headlines this week. On Sunday, the young man appeared before the Jerusalem Magistrate Court over an earlier tweet, in which he called upon his allies to stalk anti-government demonstrators.

"I'm inviting everyone to come protest, day and night… outside the homes of those people who've been responsible for organizing the anarchy across our country in the past few weeks," Yair wrote on Thursday.

In order to make stalking them easier, the PM’s son posted the personal data of some of the protest leaders online, including their names, phone numbers and addresses.

For months, Israel had been gripped by protests against Netanyahu. The latest rally on Saturday saw 10,000 gather in Jerusalem and try to organize a sit-in outside the PM's official residence. The police dispersed the crowd and arrested 12 people.

The public anger is fueled by a bevy of charges of bribery, fraud and breach of public trust officially filed against the PM, as well as by the country's strict coronavirus lockdown, which has caused an unemployment surge.